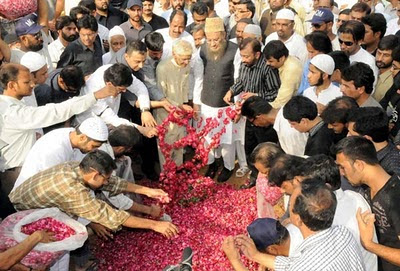 About Edhi Foundation
Edhi established his first welfare centre and then the Bilqis Edhi Trust with a mere Rs. 5000. What started as a one-man show operating from a single room in Karachi is now the Edhi Foundation, the largest welfare organization in Pakistan. The foundation has over 300 centers across the country, in big cities, small towns and remote rural areas, providing medical aid, family planning and emergency assistance. They own air ambulances, providing quick access to far-flung areas.

Edhi is to Karachi what Mother Teresa was to the poor of Calcutta. Edhi and wife Bilquees have spent a lifetime working for people and their welfare work to date remains unparalleled in Pakistan. They are both very private people who shun publicity. They have had little formal education, and are totally committed to the cause of helping the poor and needy.


The Dawn of Edhi Foundation
What started as a one-man show operating from a single room in Karachi is now the Edhi Foundation, the largest welfare organization in Pakistan. The foundation has over 300 centers across the country, in big cities, small towns and remote rural areas, providing medical aid, family planning and emergency assistance.

Born in 1928 in Bantwa , Gujarat, India , Edhi’s family belonged to the industrious Memon community. From a young age his mother taught Edhi to be kind towards others and to help the poor. In 1947 the family migrated to Pakistan and settled in Karachi. That was a time of great emotional trauma and social and political upheaval. Edhi became involved in social work and began working with welfare organisations and soon started his own dispensary, providing medical aid to the poor. He bought his first ambulance, an old van which he called the "poor man’s van" and went around the city providing medical help and burying unclaimed bodies. His van became his advertisement and soon he came to be known for his work with the poor. As a consequence, donations started pouring in and his operations expanded, employing additional nurses and staff. It was here that Edhi met his wife Bilquees who was a trainee nurse at the dispensary. They were married in 1966. Bilquees became the ideal wife for Edhi, totally committed to welfare work.

Edhi established his first welfare centre and then the Edhi Trust with a mere Rs. 5000 [$1000]. The Edhi Foundation grew as people began to recognize its humanitarian aims. In 1973 when an old apartment building collapsed in Karachi, Edhi’s ambulances and volunteers were the first to reach the scene and start rescue operations. From then, on, through the troubles in Karachi and all over the country, Edhi’s ambulances have been rescuing and taking the injured to hospitals and burying unclaimed bodies. They go to places where even government agencies hesitate to venture.

The Edhi Foundation is the first of its kind in South Asia that owns air ambulances, providing quick access to far-flung areas. Whether it is a train accident or a bomb blast, Edhi ambulances are the first to arrive. The foundation relies on the support of its 3, 500 workers and thousands of volunteers who form the backbone of the organisation


Edhi's Founder
Despite the growth of the foundation, Edhi remains a very down to earth person. Dressed always in a grey homespun cotton, he has a hands on approach to his work, sweeping his own room and even cleaning the gutter if need be. Apart from the one room, which he uses for his living quarters, the rest of the building serves as his workplace in Mithadar, a locality of old Karachi that is full of narrow streets and congested alleyways. Adjoining their living room is a small kitchen where Bilquees usually prepares the midday meal. Next to it is a washing area where bodies are bathed and prepared for burial..

When Edhi is not travelling to supervise his other centres, a typical day for him begins at five in the morning with Fajr prayers. His work starts thereafter answering any calls for help, organizing and meeting people in need while afternoons are spent at various centres and hospitals all over the city. In the evening he dines with hundreds of poor at his "langar" [free community meals common among Hindus, Muslims and Sikhs] at another Edhi centre in the city. His Fridays are invariably spent at homes for the destitute children where Edhi personally helps bathe the ones who are physically handicapped, before joining them for Friday prayers. Occasionally, when he is able to, he also takes them out for picnics.

Assets of Edhi Foundation
In Karachi alone, the Edhi Foundation runs 8 hospitals providing free medical care, eye hospitals, diabetic centres, surgical units, a 4- bed cancer hospital and mobile dispensaries. In addition to these the Foundation also manages two blood banks in Karachi. As with other Edhi services, employed professionals and volunteers run these. The foundation has a Legal aid department, which provides free services and has secured the release of countless innocent prisoners.

Commissioned doctors visit jails on a regular basis and also supply food and other essentials to the inmates. There are 15 " Apna Ghar" ["Your Homes"] homes for the destitute children, runaways, and psychotics and the Edhi Foundation states that over the years 3 million children have been rehabilitated and reunited with their families thorough the Edhi network.

The foundation also has an education scheme, which apart from teaching reading and writing covers various vocational activities such as driving, pharmacy and para-medical training. The emphasis is on self-sufficiency. The Edhi Foundation has branches in several countries where they provide relief to refugees in the USA , UK , Canada , Japan , and Bangladesh . In 1991 the Foundation provided aid o victims of the Gulf war and earthquake victims in Iran and Egypt .


Vision Of the Foundation
Edhi plans mass campaigns against narcotics, illiteracy, population control and basic hygiene. Edhi's wife Bilquees works in the areas of maternity centre management. She runs 6 nursing training schools in Karachi , which provide basic training courses. These centres have so far trained over 40,000 qualified nurses. Some 20,000 abandoned babies have been saved and about a million babies have been delivered in the Edhi maternity homes. Bilquees also supervises the food that is supplied to the Edhi hospitals in Karachi . The total number of orphans in Edhi housing is 50,000 and Edhi's two daughters and one son assist in the running of the orphanages and the automation of these institutions.

Edhi's vision is to create an institution that will carry on his life's work and survive for a long time to come. His dream is that of a Pakistan as a modern welfare state, which provides a safety net for the poor and needy while providing basic health and education with vocational skills. A welfare state Edhi feels is the only way to tackle Pakistan 's myriad social problems. He hopes that one day, Pakistan will be a model for other developing countries.

The Edhi Foundation refuses to take any aid from the Government, thereby maintaining its independence
Posted by Chief Editor at 4:39 PM No comments: Links to this post

Email ThisBlogThis!Share to TwitterShare to FacebookShare to Pinterest
Labels: Abdul Sattar Edhi, Who is who in Karachi
Older Posts Home
Subscribe to: Posts (Atom)