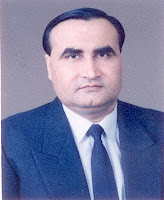 By Abdul Qadir Qureshi
Aftab Memon, a Grade 20 Officer of Pakistan Railways Service, has been appointed as Managing Director of the Pakistan Railway Advisory and Consultancy Services (PRACS) upon the completion of National Management Course at Staff College, Lahore.
He has served Pakistan Railway at various senior positions including Office of Divisional Superintendent Lahore and Karachi besides holding various positions at the Railway Headquarters.
He has a vast experience in railway operations particularly in freight operations at Karachi besides administration and management. He has also served in Sindh Government as Director General Local Government.
As DS Railway Lahore and Karachi, he was instrumental in curbing the menace of black marketing of tickets and ticketless travelling, mismanagement of reservations of seats besides achieving highest revenue earning records.
Soon after taking charge as MD of the PRACS he revealed that his priorities will be to acquire more projects for the PRACS in Pakistan and also outside besides improving the service of trains being run by his organization.
His appointment as the helmsman of the PRACS has been hailed and it’s being expected that the organization will benefit immensely from his expertise.
It may be recalled that the Pakistan Railway Advisory & Consultancy Services Limited (PRACS) was incorporated in 1976 as a private limited company under the repealed companies Act, 1913. In the year 2002, it was converted to a public limited company under the Companies Ordinance, 1984.
The Chief Executive of the company is the Managing Director who has full autonomy, subject to the control of Board of Directors, of running and operating day to day business affairs.
The PRACS provides a wide range of services in the fields of civil Engineering, commercial management of passenger trains as well as passenger reservation and ticketing, Rail Cuisine, Mechanical engineering and Electrical engineering.
Since its inception, the PRACS has successfully completed over 200 assignments pertaining to the said disciplines, including feasibility studies, projects management, providing services, coordination, field surveys and consultancy at national as well as international level.
Posted by Chief Editor at 8:14 PM