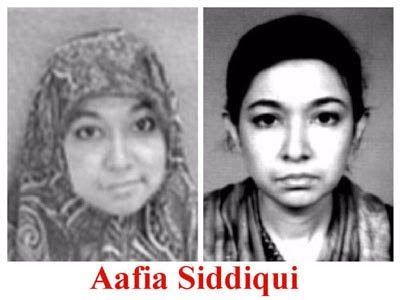 Gulshan-e-Iqbal police claimed to have lodged, in their respective police station, the case of abduction of Dr. Aafia Siddiqi and her children against the former present Pervez Musharraf on Monday morning, Geo news reported.

According to sources, Dr. Aafia Siddiqi was abducted with her children from Karachi in 2003 while she was on her way to Quaid-e-Azam International Airport to catch an Islamabad-bound flight.

She remained missing for five years until reports of her detainment in US-based Bagram prison in Afghanistan, were reached here.

Subsequently, upon pressing form Pakistan, US authorities shifted her from Bagram prison to United State for legal trial over charges of carrying out assault on US-allied troops in Afghanistan.
Posted by Chief Editor at 12:08 PM No comments: Links to this post