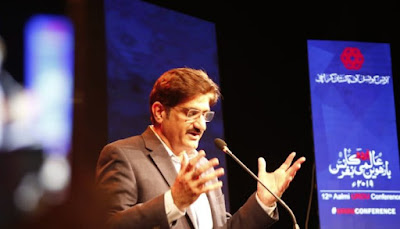 Declaring the multilingual city of Karachi as the hub of the cultural activities, he reckoned that the culture harmony in Pakistan was stronger than any other country in the world.

“Pakistan is a country of different cultures and there is a need to promote cultural activities in every province,” he emphasized.

The Sindh Cultural Minister, Sardar Shah, observed that just as the Indus River was joining the whole of Pakistan from Kashmir to Karachi, Urdu language was uniting the whole Pakistan as a nation. 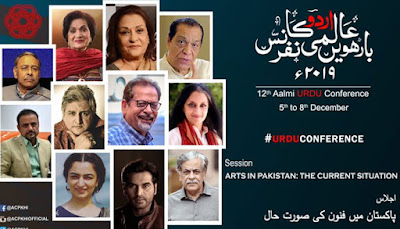 “Despite the heaviest of odds, Urdu has survived as the language of communication and cultural harmony in Pakistan,” he added.

The President of the Arts council of Pakistan, Muhammad Ahmed Shah, stated that there were hardly a dozen people present in the auditorium when he and his team had launched the Urdu Conference 12 years ago with a budget of only Rupees one million.

“As you all know, now the International Urdu conference has become a global brand of Pakistan. This year’s Urdu conference won’t be having sessions of Urdu only but we will have sessions in all the other regional languages. The Urdu Conference had now changed to a national cultural conference and for the first time sessions of other languages were also to be held in the conference. On the other hand we have delegates from India, Germany, Japan, USA, Canada, and China,” he said.

In the opening session, Shamim Hanfi and Haris Khalique presented they papers on the current political, social and literary situation in Pakistan and the world. The session was chaired by Chief Minister Sindh Syed Murad Ali shah and hosted by Muhammad Ayub Shaikh.

The conference, to continue until December 8, will feature over 150 delegates from 20 countries, along with 32 sessions on diverse forms of art such as film and TV.

Music and dance performances, book fairs, dasatangoi and mushairas as well as a photography exhibition, capturing the 11-year old history of the conference have also been planned on the sidelines.
Posted by Chief Editor at 9:19 PM Links to this post