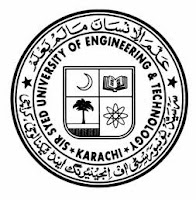 The Sir Syed University of Engineering & Technology (SSUET), Karachi, as in the past, has prepared a report on rain emergency as a part of public service to assist civic bodies and other stakeholders functioning in Karachi.

The purpose of the report is to emphasis civic bodies for preparatory work before monsoon Since monsoon season starts from July, it is expected that civic bodies may have carried out necessary works. But, efforts of KMC and other local authorities for de-silting and cleaning of nullahs and drains are not visible. Still there is some time left for follow up.

Karachi is located on the coast as a result it has a moderate climate. There is less precipitation during summer due to inversion layer (decrease in temperature is upper atmosphere with low pressure). The city receives on an average 200 mm (5.77”)   rains from July to September.

These conditions and heavy rainfall in neighbouring country indicate rains would start from July onwards. Even if rainfall is less it is the high intensity that matters in case of Karachi . High intensity rain causes loss of life and property. Usually monsoon season synchronizes with high tides in sea and soften results in wind storm before rain.

There is no proper storm water drainage system in Karachi. One that exists is found in deteriorated condition lacking proper maintenance. Outfalls are blocked. Illegal construction of houses, commercial establishments “Katchi Abadies” and encroachments on nallahs has reduced effective carrying capacity of drains.

Missing manhole covers pose threat to life specially children. Due to excessive load sewers commonly collapse. Transportation system is disturbed as the slope of road does not match side drains.

Mismatching and digging of trenches for laying utilities or road construction before monsoon pose traps for citizen. Long traffic hold up occurs whenever we have rainfall. Snapping of live wire during rains, bill boards hazard pose serious threat to life.

According to the report, KMC and other civic agencies need to undertake immediate coordinated measures like replacement of missing manholes covers completed, desilting, cleaning of nallahs and drains, essential equipments, machinery, pumps, standby generators dewatering pumps to be available and in working condition, outfall structures to be remodeled, banks of nallahs to be re-strengthened, protective measures at KESC system network to overcome problems of electrocution, safety steps to protect bill boards from falling, solid waste management system to be organized in a manner that it does not obstruct flow of rain water, roads against slope/gradient for flow of rainfall runoff to be improved, surveillance of conveyance, transmission, distribution system of water supply, water quality monitoring and repair and replacement work/retrofitting works to be completed.

Rain is gift of nature and is a blessing. In the absence of preventive works before advent of monsoon season the blessing converts into a problem and life in Karachi comes to a standstill.

Such situation is to be avoided at all costs. Particularly all venerable points in city where commonly rainfall runoff accumulates must be improved to address the problem, the report emphasizes.