Karachi transporters to keep vehicles off the road

City transporters, fearing their vehicles would be impounded by law enforcement agencies for blocking intersections of MA Jinnah Road during the congregations and main processions of Muharram-ul-Haram, have decided to keep the vehicles off the road, The Nation has learnt here on Tuesday.
President of Karachi Transport Ittehad, Irshad Hussain Bukhari informed that law enforcement agencies would take over the buses and minibuses forcibly after 7th of Muharam and place them at sensitive places to block areas from where the Muharrram processions would pass.
He said if any driver or conductor offers resistance, they are immediately detained.
He said police have started to impound vehicles however he declined to give exact figures of how many vehicles have been taken over.
He said, last year the law enforcement agencies detained over 150 vehicles for security reason and used them for blocking roads.
He said to avoid such an occurrence and as safety measure it had been decided to withdraw vehicles.
Irshad Hussain Bukhari expressed serious concern about the safety of the public transport vehicles adding that last years, unidentified miscreants torched their 50 vehicles which were used as road blocks during the main processions of Aashura of last year.
He further said that Sindh Government did not give compensation to the affected bus owners and once again it had started holding vehicles forcibly. According to information available Karachi police every year on the crucial days of Muhram-ul-Harram get hold of the public vehicles, cargo containers, goods transport vehicles, in order to place them for the security purpose at different intersections of the main MA Jinnah Road from where the processions of the Muharram-ul-Haram would pass.(Nation)
Posted by Chief Editor at 12:38 PM Links to this post

Crackdown in Karachi: More than 300 including Taliban leaders arrested 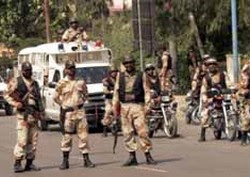 Rangers have arrested more than 300 terrorists, including Taliban leaders after conducting a search operation in Manghopir, Karachi.
Rangers sources said that they had arrested a terrorist, Zain-ul-Abedin, a few days ago and initiated the search operation on information provided by him in Manghopir and its surroundings areas, early Tuesday morning.
Sources say that the Sindh government had received information from secret agencies that terrorists have planned terror activities in Karachi during Muharram-ul-Haram. (SAMAA)
Posted by Chief Editor at 5:45 PM Links to this post 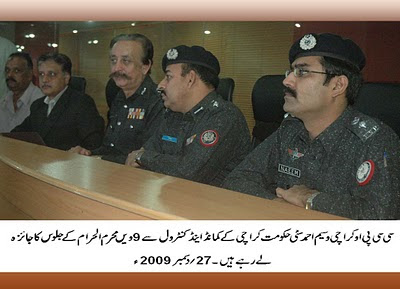