The banks operating in Pakistan have been allowed to facilitate their customers in the wake of Coronavirus (COVID-19) pandemic, having rocked the world. The circular in this regard was issued by the country’s central bank on March 28.

The State Bank of Pakistan (SBP), in an attempt to combat the potential spread of the pandemic, has advised for limiting person-to-person interactions and to provide ease of services to the customers of the various banks.

Now Direct Cheque Deposit Facility is being introduced under which a crossed cheque may be presented by payee/beneficiary directly into the paying/drawee bank instead of their bank branches as per the existing practice.

Doorstep Cheque Collection Facility has also been launched in which Banks/MFBs may make arrangements to collect cheque from registered addresses of their customers upon their request.

Drop box Cheque Collection Facility, under which customers may drop their cheques in drop boxes of their banks, will be installed in selected branches while the banks have also be authorized to allow their Corporates/Priority customers to send them the scanned image of the cheque along with relevant details of the Beneficiary either through registered emails or through mobile Apps of their banks to push funds from their accounts to the payee bank.

The banks are being encouraged to implement additional risk mitigating measures as per their internal policies while offering these services to their customers.

Further, in order to minimize person-to-person interaction, Banks/MFBs may also make arrangements with the Clearing House (NIFT) for clearing their cheques through Image Based Clearing (IBC) functionality as per the agreed SOPs between NIFT and banks.
Posted by Chief Editor at 1:20 PM Links to this post 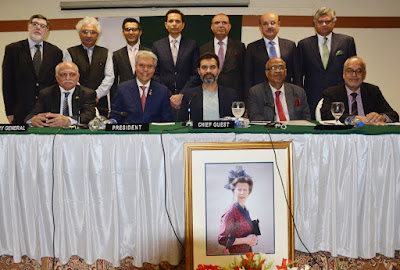 
The State Bank of Pakistan (SBP) Governor, Dr Raza Baqir, assured the members of the English Speaking Union of Pakistan (ESUP) as well as others attending the meeting at Beach Luxury Hotel, Karachi, on March 2 that the economic conditions of the country were far better off in many areas as compared to the past.

While the audience, having gathered much before the arrival of the chief guest, stood divided in believing the contents of the speech, the SBP Governor didn’t mind replying to tough questions in the interactive session.

Aziz Memon, the livewire President of the ESUP, showered Dr Raza Baqir with praise while introducing him formally before inviting the distinguished speaker to deliver the keynote address. At the end of the session, the SBP Governor was presented a shield by the ESUP officials. 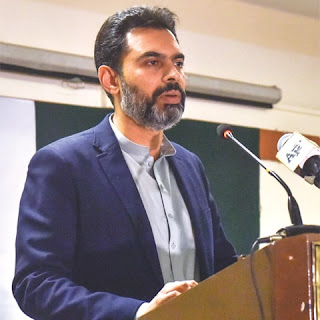 Dr Raza Baqir, having worked at key positions in the past, including a stint with the International Monetary Fund (IMF), described the functions of the SBP, clarifying that the collection of taxes was not its responsibility. He had taken over as the Governor of the SBP last year.

“We regulate banks in order to minimize the incidents of bad debts and write-offs. We oversee the safety of the payments, which means looking after the transactions between banks and parties. Besides overseeing the foreign exchange market, we also oversee Pakistan’s foreign reserves and set the policy rate of the SBP, which in turn helps to set market rates,” he informed.

The SBP Governor reminded the audience that the country’s exchange rate and reserves were falling alarmingly last year but the situation was brought under control by implementing some tough measures.

“The reserves were down to $7 billion at which point we decided to change the exchange rate system and let the market decide the exchange rate. It’s a concept that many emerging markets have been using for years but it was new for Pakistan. There were a lot of apprehensions and criticism when we adopted market-based exchange rate. But those critics and experts who predicted dollar to go sky high have become silent,” Dr Raza Baqir shared. 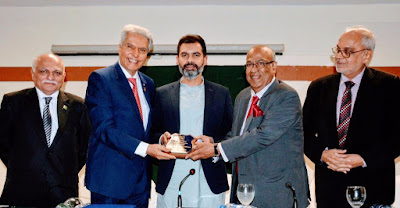 Quoting facts and figures, he was of the opinion that the country’s economy could have been in shambles if, the difficult reforms had not been undertaken.

He highlighted the importance of foreign exchange reserves, reckoning that it was the single most important determinant of a country’s economic sovereignty.

The SBP Governor stated that the monetary policy committee of the central bank had to increase the interest rates because the rise in inflation was rising.

“One of the factors of the increasing inflation was also the pressure on rupee, the depreciation of the rupee that had occurred over the preceding months had caused the prices to rise. The last rate increase was done in July when the inflation was around 8 to 9 percent. The inflation has now gone upto 12 percent but we haven’t increased the interest rates since July last,”he added.

Dr Raza Baqir announced that the SBP, working on reducing the reliance on printed currency notes, will soon be launching a couple of innovative products to facilitate digital transactions on a massive scale.
Posted by Chief Editor at 11:22 AM Links to this post