Nisar Memon’s An Insight into the Senate launched in Karachi 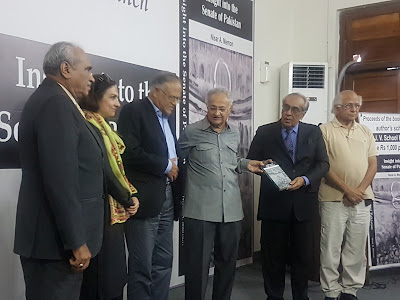 Describing national security of Pakistan as key to our survival and growth, Senator Nisar Memon, a former Federal Minister, called upon everyone to rise to the occasion to work for a common of cause of upholding the dignity of our people, sovereignty of the country and strengthening of the institutions, which he reckoned, were in a state of decay.

He gave the clarion call while speaking at the second launch of his book "An Insight into the Senate of Pakistan" held at the NJV High School's auditorium in Karachi on March 4. Earlier the first launch of the book had taken place in Islamabad. 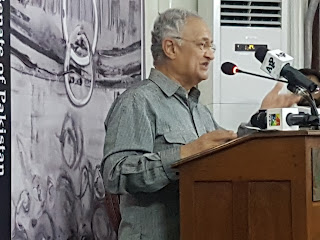 Nisar Memon discussed national security at length and dilated upon its various aspects like water, environment, climate change, finance, defence, defence production and social service. In the book, he said, he has also touched upon the present day's most sensitive issue of international peace. 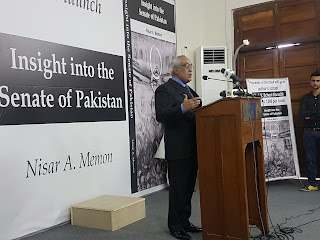 While bringing the book to conclusion, Nisar Memon asked "can't people the believers in one God, one Prophet, one Book and one Faith be joined on one front against aggression and violation of human rights".

Nisar Memon, who served the Senate for six years, told his audience that objective of his writing this book was to let the people know about those aspects of the Senate to which it is not possible to them to have access to. 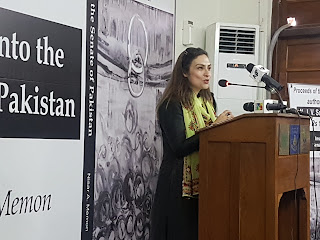 He said many things which occur in the Senate does not appear in newspapers and, therefore, he thought, to present himself before the people for accountability and what he did when he was in the city, what changes and reforms should be brought.

He said that when you are elected to the Senate to serve the cause of people for six long years, you have to give the best to the people and they must know what you performed, what you gave and what you learned. 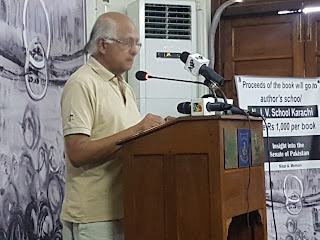 Speaking on the occasion Javed Jabbar facilitated Nisar Memon for writing this book which was long overdue from a parliamentarian about parliament.

While eulogizing the services of Nisar Memon, he recalled his appreciative role in a non-partisan cabinet, his role in the reformers movement and again in a caretaker government and said he enjoyed excellent opportunities into governments he served with a constructive approach.

He described his book a genuine attempt aimed at strengthening the institutions and pointed out that Senate is the custodian and rather political custodian of all the four provinces and his book contributes wealth of experiences he gained during his six years of Senatorship.

He mentioned the book a good combination of remembrance, intelligence and contribution to democracy. 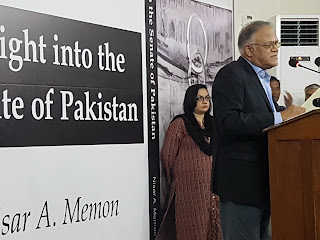 Senator Syed Muzaffar Shah, who was re-elected as Senator for another six years term only the other day, in his eloquent address marked with fluency, observed that Pakistani politicians are not fond of writing books outlining their experiences as parliamentarians and which the people at large want to know as to how the parliaments work in a parliamentary democracy.

Senator Shah, who has the presence in as many as 14 committees of the Upper House besides being Chairman of Food and Agriculture Committee and said that Senate is the custodian of rights of the provinces while passing laws.

He disclosed how he save 1300 acres of prime land in the heart of Islamabad belonging to Pakistan Agriculture Research Council and said the report thereof by highly appreciated by the Supreme Court.

Referring to clamouring of accusation of horse trading in the Senate election, he stated to have secured highest number of votes without spending a single penny.

He asserted that parliamentarians should write books and follow the example of Senator Nisar Memon who ventured to do this which only few would do as people want to know how parliament work and how the Senate functions and this book is worth reading for such people. 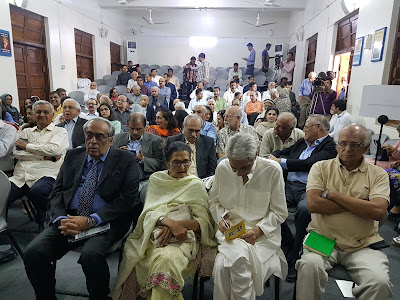 Muzaffar Shah was confident that soon the Senate will also have financial authority being the custodian of provinces.

He paid tributes to Nisar Memon from a Sindhi background and from the corporate sector and said he made a significant role in the political history of Pakistan.

Marvi Memon in her usual charming style said that to be elected a member of the parliament indeed is an honor as they can make a difference in the political history.

She said that it was a very special for her to have served the country along with her father Nisar Memon and advised that new generation should learn from his experiences.

Marvi Memon said that the thoughts cherished by his father as Senator and as Federal Minister were always dedicated to the national causes and one would find it explicitly in his book "Insight into the Senate of Pakistan".

Tariq Hussain from the World Bank spoke about Nisar Memon's focus on aspect of National Security as highlighted by him in his book, particularly the aspect of water which today is assuming as an alarming issue, particularly with reference to drainage, water logging and salinity.

He said that the book should encourage the others for improving the effectiveness of our political bodies.

Syed Raghib Shah referred to Nisar Memon's acumen about technical issues and said that although he was Chief Engineer in WAPDA he found Mr Memon more technical than him he would speak in the House Committee on Water issues.

The present Senators, he said, should pursue all those recommendations and suggestions as provided by Nisar Memon on water as Chairman of Water Committee which were duly recognized by the world bodies.

On the occasion Mr Nisar Memon announced that proceeds of his book would go to the NJV High School where he had remained a student. He congratulated Senator Syed Muzaffar Hussain Shah for having been elected to the Senate for another six years term.

The launch ceremony concluded with the presentation of copies of the book "Insight into the Senate" to the speakers of the day by Nisar Memon himself.
Posted by Chief Editor at 2:34 PM Links to this post

An Insight into the Senate to be launched on March 4 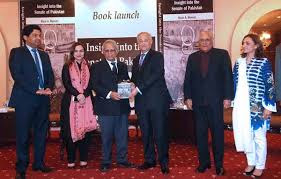 The book titled ‘An Insight into the Senate’ is set to be launched at a ceremony to be held in Karachi on March 4.

The book has been authored by Senator Nisar A Memon, who has also been a former Federal Minister for Information and Broadcasting. 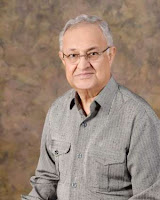 It’s in the fitness of things of that the book is being launched in Karachi one day after the Senate elections being held on March 3, as 52 senators will be completing their six-year term on March 11.

In the book, Nisar Memon, who has remained as Senator for six years, gives an insight into the working of the Senate with special reference to National Security which includes various aspects like water, climate, environment and defence.

As Senator, he was the Chairperson of the Standing Committee of Senate on Defence and Defence Production and the Parliamentary Committee on Water Resources.

He was also a member of the Standing Committees of Senate on Foreign Affairs, Finance and Economic Affairs and Housing and Environment Committee.

The first launch of the book was held in Islamabad and the author has selected Karachi as the second venue for the launch of his book.
Posted by Chief Editor at 3:17 PM Links to this post