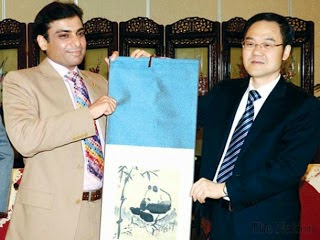 A delegation of Pakistan’s young parliamentarians visited Hangshui town in Sichuan province where they were briefed about grassroots structure of the Communist Party of China (CPC). The party building in the town was shown to the delegation and they also interacted with members of the local community.


Tang Wenjin, the Vice Secretary General of the CPC Sichuan Province, hosted a luncheon reception in the honour of the 15-member delegation, comprising of the young parliamentarians of the Pakistan Muslim League (Nawaz).


Both sides discussed areas of mutual cooperation and discussed the current projects underway in Pakistan with Chinese collaboration.


Speaking on the occasion, Hamza Shahbaz Sharif, a Member National Assembly, observed that he overwhelmed by the warmth and affection extended to him and his delegation by the Chinese government and the Communist Party.


He remarked that the Chinese investment of $30 billion which was announced during Punjab Chief Minister’s recent visit will play a big role in prosperity of Pakistan and bringing the people of the two nations even closer.


The delegation expressed gratitude to the university administration for taking such keen interest in Pakistan studies and for enrolling Pakistani students at the university.