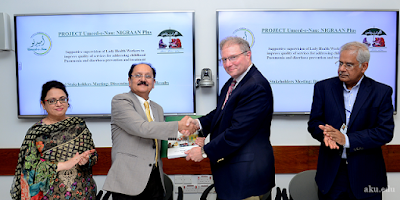 The Sindh government has approved a major upgrade to the curriculum for lady health supervisors (LHSs) in a move aimed at enhancing the quality of door-to-door preventive healthcare services delivered by lady health workers (LHWs).
The new curriculum, which incorporates the latest treatment guidelines for pneumonia and diarrhoea: two preventable diseases that caused over 670,000 deaths in the country in 2015, was unveiled during a meeting of provincial stakeholders and researchers involved in the Nigraan Plus study at Aga Khan University.
The new curriculum includes directives on how LHSs can effectively support and supervise the work of LHWs thereby empowering them to apply the latest knowledge and clinical skills to manage pneumonia and diarrhoea at early stages; when care is the most effective.

“This revised LHS curriculum will now be used for training purposes and it is envisaged that it will ultimately help in better management of childhood diarrhoea and pneumonia. I express my sincere gratitude to representatives of the Sindh Lady Health Worker’s Programme for Family Planning and Primary Healthcare, and the Nigraan Plus team at AKU for their voluntary participation to revise this curriculum. They have made great efforts in reviewing and translating it to Sindhi and in producing the first-ever electronic copy of this curriculum,” the Sindh Lady Health Worker Programme Director, Dr Ghulam Hussain Sheikh, observed.

Nigraan Plus, a community research and management intervention in Mirpurkhas, saw AKU researchers work alongside provincial health officials to investigate the real-world barriers hindering the fight against pneumonia and diarrhoea.
One of the components of Nigraan Plus was a knowledge assessment survey of 32 LHSs and 160 LHWs in the district which found that most health workers lacked the minimum knowledge to manage cases of the diseases. It also noted a need to improve the quality of mentorship provided by LHSs to LHWs.

“Most of the discussion about improvements to health systems revolves around LHWs. This means that LHSs are vastly underutilized. An LHS who effectively mentors 15 to 20 LHWs under his/her guidance can have a massive multiplier effect since every LHW is responsible for 100 households. Our revised curriculum and the policy recommendations flowing from our findings have highlighted cost-effective and simple measures that will help Pakistan achieve targets under Sustainable Development Goal 3 on reducing childhood mortality,” Professor Fauziah Rabbani, the project’s principal investigator, stated.

The researchers and health officials from the Sindh government also discussed a range of relevant findings from research under the ongoing Nigraan Plus project.
Over the first year, community health workers surveyed over 4,000 mothers and caregivers in low income areas of Mirpurkhas. They found that fewer than one in three caregivers were aware of the symptoms of dehydration, a complication associated with diarrhea, while less than four out of ten households surveyed could detect breathing difficulties, a symptom of pneumonia.

A lack of awareness of these symptoms resulted in 70 per cent of families paying to visit a private clinic for treatment even though these health issues could be easily treated at the doorstep by an LHW, members of the Nigraan Plus team noted.
The researchers also noted that parents often stopped giving food and drinks to a child suffering from loose motions in order to ‘give the body rest’. This widespread practice often resulted in a worsening of dehydration often requiring hospital care.

The findings from the study also noted unnecessary delay and expense in the treatment of dehydration. This is because most families went to the market to buy sachets of oral rehydration salts (ORS) even though they could quickly boost their child’s health by making a home-based solution with salt, sugar and water. This delay in providing ORS also raised the likelihood of dehydration worsening to a dangerous level.

Similar misconceptions were also noted in the case of pneumonia with the majority of caregivers viewing signs of respiratory infection as being a ‘mere cough’ meaning that only 12 per cent of respondents provided appropriate antibiotics to their children.

The researchers called on the government to enact the measures in order to protect children from pneumonia and diarrhea like the LHWs should have access to antibiotics, zinc supplements and ORS. This will help them provide essential treatment at home instead of urging caregivers to visit the hospital.