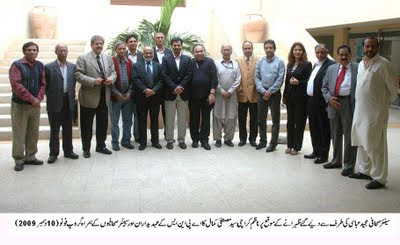 City Nazim Syed Mustafa Kamal has said that we have prevented the citizens from becoming a suicide bomber as during the last four years we have not only worked but also waged jehad by providing basic civic facilities to them
He said this was addressing at a luncheon meeting given in his honor by senior journalist majeed Abbsasi here at a local hotel on Thursday. The program was also attended by the President APNS Qazi Aslam, Vice President APNS Qazi Asad Abid, Dr. Karim Rajpar, Director General NARA Tuaha Farooqi, Mehmood Sham, Columnist Agha Masood, Khalil Ahmed Nenitalwala, Abbas Mehkri, Khushnood Ali Khan, Mujahid Barelvi, Habib Khan Ghori, Faisal Aziz, Mudassir Mirza, Dr. Huma Mir, Dr. S.A Siddiqui, Javed Iqbal, Anwar Ahmed Zai and other prominent persons from print and electronic media.
Speaking on this occasion Nazim Karachi said that the peoples in this country were not provided basic facilities even after 62 years. People are entangles in various problems and facing a serious kind of frustration and due to this they prefer to become a suicide bomber and play with fire. In order to prevent them from becoming suicide bombers we will have to solve their basic problems without further delay. He warned that even if today we failed to take measures for providing citizens the basic civic facilities than 10 crore people out of 17 crore will become suicide bomber. He said today there was no hope for the citizens and citizens are without the health and education facilities and they are fed up now and only want to satisfy themselves from only self immolation.
City Nazim said that during the last four years we have worked for the development of Karachi with an objective that after providing them basic civic facilities some frustration among them would alienated and for this we have worked day and night to solve the problems of the citizens in Karachi and the peoples have fully supported and helped us in our endeavors.

Nazim Karachi said that we we did all these works with pure intentions and a vision to facilitate people. The basic theme was to provide maximum basic civic facilities to the citizens. He pointed out that in Gadap town Cadet College has been established and its 80 percent work has been completed and this area was chosen due to the presence of lot of Goths in this vicinity.
He explained in detail various problems he confronted during his four year tenure but said development of Karachi will ensure development of the country. He also recalled that there should be one chain of command of the city and if there were 13 agencies controlling the city development will always be hampered.
Vice President APNS Qazi Asad Abid, Senior journalist Mehmood Sham and Majeed Abbasi also spoke on this occasion and paid tribute to City Nazim Syed Mustafa Kamal for his outstanding service for the city of Karachi. City Nazim was also presented with traditional Sindhi Ajrak and Sindhi Cap on this occasion…
Posted by Chief Editor at 11:10 PM No comments: Links to this post