Glowing tributes paid to Z A Nizami on death anniversary Glowing tributes were paid to Engr Z A Nizami, who was referred to as Baba-e-Karachi and Sir Syed Saani, at a big gathering organized by the Nizami family at KDA Officer’s Club, , to observe his first death anniversary.

His call in this regard was wholeheartedly supported by Haji Hanif Tayyab who offered his services and available resources in this regard saying that Engr Nizami had been the Hatim Tai of his era as well as Baba-e-Taaleem and Sir Syed Saani.

In his discourse the KMC Administrator, Rauf Akhtar Farooqi, described Engr Nizami a complete personality and an institution in his right and said what he did for this ever sprawling city in his life time will remain unmatched so much so he launched 45 development schemes and no one could bring till to date the 46th scheme.

He pointed out that those 45 schemes were not mere development schemes but establishment of 45 small towns with provision of all basic infrastructure facilities, a challenging task which no one else could do. He said that the younger generation of engineers must know about his achievements so that they could follow his footsteps.

Rauf Farooqi said that Engr Nizami's vision can be judged from the fact that as Director General for eight years he steered Karachi to its highest peak besides introducing new departments like Building Control Authority, Traffic Engineering Bureau, Mass Transit, water wing which later turned into Water Board besides streamlining the Master Plan department on most modern lines and introduced Karachi's first Master Plan.

Former Governor of Sindh and a member of SSUET’s Board of Governors, Gen Moinuddin Haider, considered Engr Nizami a torch-bearer of the eastern traditions who set very high standards for himself and his team.

He referred to establishment of the SSUET and observed that since its inception over 15,000 engineers have passed out from here and serving in various parts of the world. He said that the town planning of was an unmatched example of his God-gifted vision. He said he was a true educationist and his memories will always remain alive.

A former Provincial Minister, will be referred to and as an educationist when SSUET comes to limelight.
Waseem Akhtar, described Engr Nizami as a towering personality and a multi-faceted figure who, he said, will be remembered whenever the development of

He said that Engr Nizami was the one who contributed the most to the cause of promotion of education and the university established by him was fulfilling his mission of producing high-quality engineers.

Chairman PEC, Syed Abdul Qadir Shah, recalled his association with Engr Nizami, stating that he found him having the cause of SSUET students very dear to his heart as if they were his own children.

“He was a true legend and of today is because of his development vision. He was an all-round engineer, who stood taller than anyone else in the country,” Qadir Shah complimented.

Noted Aligarhian, Ali Zafar Qadri, talked about his and other members of the AMUOBA association with Engr Nizami and said that besides being a high quality planner, developer and educationist, he was above all a high quality human being having a good sense of humour.

Arif Raza, another Aligarhian recalled that Engr Nizami’s services for the AMUOBA and said it was a triangle of Engr Z A Nizami, Engr Zakir Ali Khan and Brig Qamarussalam, whose dynamism led to establishment of the SSUET.

Dost Mohammed Faizi appreciated the family members of Engr Nizami for maintaining the noble traditions of their illustrious father.

He said the nations, who forget their benefactors, go into oblivion and the best way to keep the memory of Engr Nizami alive was to establish a university in his name like the he established after the name of great educationist Sir Syed Ahmed Khan.

He said that old students of the SSUET can play a significant role in this regard. Haji Hanif Tayyab, a former Federal Minister, recalled the achievements of Engr Nizami, particularly the development of a garden within the precinct of Quaid-e-Azam mausoleum.

He shared that Engr Nizami truly followed the Hadith of Prophet Hazrat Mohammed (Peace be Upon Him) that when cities become big and congested, small cities be developed nearby and he developed 45 such small towns around .

Rizwan Siddiqi pointed out that the life of Engr Nizami could be encompassed by taking , KDA and into account.

On the occasion Azad Bin Hyder presented his 1200-page book titled “From Sir Syed to Quaid-e-Azam” to the Nizami family and said it was Engr Nizami who inspired him to write the historic book. 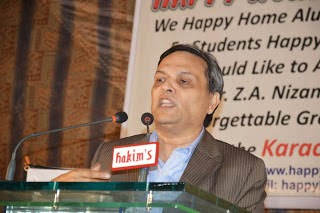 In his remarks on the occasion, Farrukh Nizami, son of Engr Z.A Nizami, gave an outline of the future plans for their illustrious father which included the establishment of Z A Nizami Educational Society, issuance of a postal stamp, compilation of book containing clippings and photographs relating to Engr Nizami besides publishing the book titled “Architecture in Islam” which their father wrote in his life time and was eagre for its launch in Saudi Arabia.

He called for naming a city road after the name of Engr Z A Nizami and hoped that if he had done something valuable, the Aligarh Muslim University Old Boys Association (AMUOBA), too, should play its role in keeping the memories of Engr Nizami alive, who remained its President for so long and served as first Chancellor of SSUET which today enjoys a big name in the world. The proceedings, which were largely attended by people belonging to various walks of life, concluded with singing of “Tarana Aligarh”.
Posted by Chief Editor at 5:22 PM