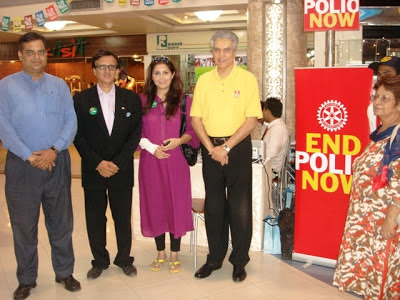 Pakistan’s Rotary Polio Plus Committee, headed by Aziz Memon, observed the World Polio Day 2012 on October 24 with unprecedented enthusiasm throughout the country.

The various Rotary Clubs, with the collaboration of the Polio Plus Committee, organized numerous programmes all over Pakistan while a lot of people around the globe participated in the World’s Biggest Commercial, promoting the international effort to eradicate the devastating disease.

The innovative, interactive online initiative provided everyone a chance to join Archbishop Desmond Tutu, Bill Gates, Jackie Chan, Angelique Kidjo, and other world figures and celebrities having already joined in Rotary’s This Close campaign in support of polio eradication.

The participants uploaded photos of themselves to Rotary’s polio eradication website, endpolionow.org, edited into the constantly expanding promotional spot. They were sent an email with a direct link to their image and comment within the commercial.

Rotary International also released End Polio Now, an eclectic album of songs performed by its celebrity polio eradication ambassadors from the music industry. The album is available for download on iTunes, and soon as a CD from shop.rotary.org, with all proceeds from sales going to PolioPlus.

Visited by hundreds of people on a daily basis, more so these days, due to the forthcoming festival of Eid, the EPN banners on pillars caught many people's attention. A volunteer doctor has been made available at the stall screened for blood sugar free-of-charge, attracting adults.

Similar stalls were set up in many other bustling shopping malls of Karachi and other cities of Pakistan. A three-page newspaper supplement was also brought out by the Polio Plus Committee to mark the occasion.

“Coinciding with World Polio Day, Rotary is ramping up its advocacy work in the 200 countries and regions where Rotary clubs exist to encourage every national government to commit to help meet a $700 million funding shortfall for the Global Polio Eradication Initiative through 2013,”  Pakistan’s National Chair, Polio Plus Committee, Aziz Memon, disclosed.

“Although new polio cases are at an all-time low, there were fewer than 180 worldwide in 2012 as of October 16 the funding gap has already curtailed scheduled immunization activities in polio-affected countries. If eradication fails and polio rebounds, up to 200,000 children per year could be paralyzed,” he warned.

‘The governments need to step up and honour their commitments to polio eradication if we are to achieve our goal of a polio-free world. We are at a true tipping point, with success never closer than it is right now. We must seize the advantage by acting immediately, or risk breaking our pledge to the world’s children,” the Chair of the Rotary Foundation, Wilfrid J. Wilkinson, remarked in his message on the World Polio Day 2012. 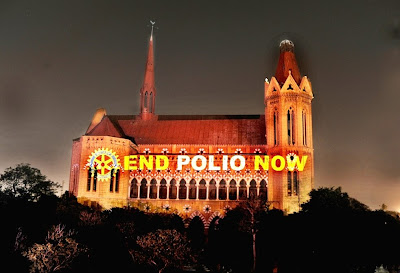 The historic building of Frere Hall in Karachi was illuminated with great fanfare on February 17 as a part of the awareness drive launched by Rotary International’s Pakistan National Polio Plus Committee.

The Committee’s National Chair, Aziz Memon, informed the dignitaries and the media corps present on the occasion that the illumination ceremony was a part of an annual tradition in which community-based Rotary clubs illuminate landmarks and iconic structures around the world with the humanitarian group’s pledge to eradicate polio, a crippling childhood disease.

Besides the historic Frere Hall in Karachi, another famous building in Pakistan, the distinctly modern WAPDA House at Lahore will glow brightly with Rotary’s illuminated message ’End Polio Now’ on February 23.

The lighting ceremony in neighboring India is perhaps the most symbolic of the progress made by Rotary and its partners in the Global Polio Eradication Initiative. In January, India, until recently an epicenter of the crippling disease, reached a historic milestone by marking a full year without recording a single new polio case. 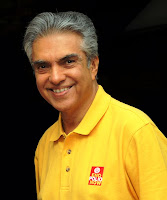 Significantly, India’s success sends a message of hope across the border to Pakistan, one of the last remaining polio-endemic countries (the others are Nigeria and Afghanistan).

In 2011 Pakistan reported 198 polio cases; Afghanistan 80; Nigeria 57 and India 1. Worldwide, fewer than 650 polio cases have been confirmed for 2011, less than half the 1,352 infections reported in 2010.
.
Overall, the annual number of polio cases has plummeted by more than 99 percent since the initiative was launched in 1988, when polio infected about 350,000 children a year. More than two billion children have been immunized in 122 countries, preventing five million cases of paralysis and 250,000 deaths.

“These global illuminations carry Rotary’s pledge to end polio—saying to the world that we will fight this crippling disease to the end,” says Rotary International President Kalyan Banerjee, a native of India. “But we are not there yet. Rotary and our partners will continue to immunize children until our goal of a polio-free world is achieved. And we must remain vigilant against a resurgence of this terrible disease.”

Rotary club members worldwide have contributed more than US$1 billion to polio eradication, including nearly $190,000 raised by the 3,120 members of Pakistan’s 150 Rotary clubs. Rotary International has provided almost $73 million in grants for polio eradication activities in Pakistan.

Todate, the government of Pakistan has provided nearly $50 million in domestic resources. President Asif Ali Zardari and Prime Minister Yousuf Raza Gilani have made polio eradication a national priority by launching the National Emergency Action Plan in 2011 and an Augmented Action Plan for 2012, aimed at increasing the capacity and effectiveness of the polio immunization programme with Begum Shahnaz Wazir Ali having been appointed as the Focal Person of the Prime Minister’s Task Force Committee.

In January, Rotary leaders announced Rotary clubs worldwide had raised more than $200 million in response to a $355 million challenge grant from the Gates Foundation, which in turn contributed an additional $50 million in recognition of Rotary’s commitment. All of the resulting $605 million will be spent in support of immunization activities in Pakistan and other polio-affected countries. 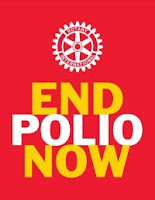 “Rotary continues to be the heart-and-soul of polio eradication,” Gates Foundation Co-Chair Bill Gates wrote in his annual letter issued in January.

The other spearheading partners in the Global Polio Eradication Initiative are the World Health Organization, UNICEF, and the U.S. Centers for Disease Control and Prevention.

Rotary is a global humanitarian organization with more than 1.2 million members in 34,000 Rotary clubs in over 200 countries and geographical areas. Rotary members are men and women who are business, professional and community leaders with a shared commitment to make the world a better place through humanitarian service. Rotary’s top priority is the global eradication of polio.
Posted by Chief Editor at 2:30 PM 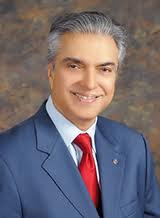 By Mohammad Nazakat Ali
“From raising funds to distributing life-saving shelters, the Rotary clubs worldwide, together with the local clubs, are proactively assisting flood victims in Pakistan day and night to help those in need.”
This was observed by Mr Aziz Memon, Chairman, National Polio Committee, Rotary International, who has remained the Governor of the Rotary clubs in Pakistan and Afghanistan, the other day.
“The Rotary Foundation of Rotary International, one of the largest humanitarian service organizations in the world, is accepting member contributions to its Pakistan Flooding Recovery Fund to support long-term recovery in the affected areas, which have sustained billions of dollars in damage according to the Pakistani government,” he disclosed.
“The Rotary clubs are also providing immediate humanitarian assistance to flood victims, which the United Nations estimates to be more than 17.2 million people. The Rotary members in both Pakistan and Afghanistan are working together besides facilitating the international clubs,” Mr Aziz Memon said.
“Among the first international relief to reach flood victims in Pakistan was ShelterBox. a UK-based disaster response organization supported by Rotary clubs worldwide. More than 1,900 ShelterBox tents and 600 ShelterBox kits, each containing a 10-person tent, a water purification system and other survival necessities for up to six months, were pre-positioned in Pakistan in June following predictions of a particularly bad monsoon season,” the Rotary official added.
In partnership with the French Embassy Islamabad and National Disaster Management Authority Pakistan, Rotary members distributed the ShelterBox kits to the hardest hit areas.
John Leach, ShelterBox Head of Operations, said: “The need for shelter in Pakistan is growing by the day. We need to get more aid in as quickly as possible. By working with our international partners we can make this happen.”
ShelterBox is sending 5,000 water filtration units and 2,500 water containers to flooded areas. More ShelterBox kits are due to arrive in Pakistan soon.
A Rotary club in Houston, Texas, USA, filled two 40-foot shipping containers with relief supplies, and is coordinating with Rotary clubs in Pakistan to deliver them to Karachi, where local clubs will help distribute the goods.
A Rotary club in Multan, Pakistan has established five flood relief camps at local hospitals. Rotary members are collecting tents, household items, food, and medicine.
Experts warn of a second wave of deaths from water-borne diseases such as cholera unless flood victims have access to supplies of fresh drinking water. World Water Works, a Rotary-club sponsored relief organization that provides disaster victims with water purification tools, has sent more than 600 boxes to the southern province of Sindh. Hugo Pike, chair of World Water Works and a member of the Rotary club in Avon, England, says each box contains a water purification kit that can supply each member of a family of four with about 2 quarts of drinking water every day for a year.
Rotary is a worldwide organization of business and professional leaders who provide humanitarian service and help build goodwill and peace in the world. Rotary’s global membership is approximately 1.2 million men and women who belong to more than 33,000 Rotary clubs in more than 200 countries and geographical areas.
Posted by Chief Editor at 10:21 PM Links to this post