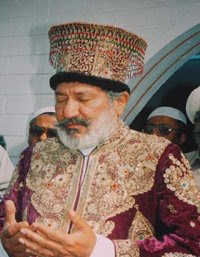 He was born in pir Goth on 22nd November1928. He had his primary education at pir Jo Goth. During arrest of his father, Education was looked after by kalifas at Dargah Sharif. His circumcision was perfumed at Grange bungalow near Sanghar.

From 8th May 1943 to 1946.
In1946 he was kept under house arrest along with his Younger brother and family members in Karachi.He stayed three years Aligrah from 1943 to 1946.in 1946 he was shifted by Ship to liver pool (ENGLAND) In England he was admitted in Majiour Davis Private School and was under arrested. This private school was no less than a hell.


This was in far flung rural area near hero in pioneer. There were only 12-13 students in this school all from foreign countries belonging to those families who opposed British rule in their countries. In this school he had no choose of subjects, but to study whatever administration said. He was forced to study a Christianity subject of Divinity to Learn French and Latin.
In 1949 Prime Minister Liaqut Ali Khan met him in England and assured of restoration of Status of Pir Pagara On 4th February 1952 his status of pir Pagara was officially restored and Dasterbandi was done.


PIR PAGARA HAD PRIMARY EDUCATION AT PIR JO GOTH
Then for some time at Karachi when he was under house arrest from 1946 he got his education at Aligarh.
In Aligarh Kazi Sadrruddin a prosecuting Inspector Police used to teach Quran. From 1946 to 1952 in Liver pool [England] in Major Davis school as told above. He had his graduation from England.

LATER LIFE OF PIR SAHIB PAGARA SHAH MORDAN SHAH SANI AFTER RESTORATION OF GADI.
Present Pir Sahib has great dominating and impressing personality. Pir Sahib is very kind hearted sympathetic, courageous and brave man. Immediately after restoration of Gadi he had many challenges. Most important challenge was to restore the image of Hur Jamat. British during last 30 years had tarnished the image of Jamat and projected the Jamat as terrorist. It was a big task to clarify the position of the Jamat to organize the scattered and absconded Jamat and to restore confidence in Jamat. He took special interest in education of Jamat and to make Jamat law abiding and peaceful citizens. He tried for academic as well as religious education. He got hur scholar-ship sanctioned by Government for poor hur students.
Philanthropic people in Jamat also supported the poor, intelligent and deserving hur students. Pir Sahib him self also paid educational expenses of poor and deserving hur students. Pir Sahib repeatedly stressed the need of education particularly higher education both males and females.
For religious education Pir Sahib on May 1952 established Jamia Rashidia at Dargah Sharif. Management and expenses of jamia was the responsibility of Dargah. By now there are about eight branches of Jamia Rashdia in different cities of Sindh from where thousands of muftis, hafiz of Quran, Molvi, Alams, and Fazils are produced who are serving in different cities of Sindh. He had established a beautiful library at Dargah Sharif which has lacks of valuable and precious books. Though he is heavily busy, he is the only leader in Pakistan who attends his telephone personally, directly, so it is very easy to talk to him for any problem. Pir Sahib married in 1954 to daughter of Makhdoom Maliak Syed Ghulam Miran Shah Pir Sahib has three sons, Sibghtullah Shah [Raga sain], Ali Gohar Shah, Sadaruddin Shah[Younis sain].
After restoration of Gadi he called all the absconders of hur Jamat at Dargah Sharif, took their photographs personally. Those having major cases were handed to Government and advised to face cases and almost all of them were freed as the cases were false. Those who had minor cases or no cases were asked to live peace fully like law abiding Citizens. After consultation with Khalifas and seeking permission form Government in 1952 Pir Sahib made a program to meet Jamat and tour the different areas. He came to hunting first in Makhi and Awadh. Till that time Hurs were in concentration camps. Some people advised him to go to camps so that followers inside camps can see him. He refused and said I will burn all these camps. It happened so, that after a few days all camps caught fire. Any way the inmates of camps were brought out side of camps in groups to see their leader. Pir Pagara never visited any foreign country except England [during arrest] and Saudi Arabia [for religious obligations]. Pir Pagara has no account or property in any foreign country.

Pir Sahib is very fond of Hunting some areas as Awadh is reserved for.

Pir Sahib hunting where no body else is allowed to hunt.

Pir Sahib is very fond of horses and horse racings. He has many horses of high breed, which often win the races Karachi race club has been restored only with Pir Sahib's efforts.

Sibghatullah Shah 1 provided forces to Syed Ahmed Shaheed to fight against Sikhs and since then these brave people are called as Hurs [free people] freedom struggle was practically started by Syed Sibghtullah Shah Shaheed Awal in 1246[Hijri].


Pagaras' and their followers fought for freedom against British rulers and their supporters for 108 years from 1843 to 1951.

In 1922 when Sibghtullah Shah II [Sarah Bad Shah] becomes Pir Pagara he was only 12 years old. Very soon he realized that British officer’s behavior towards Hur Jamat or Sindhi people was insulting and Humiliating, he resented and rose voiced against British rulers. He organized, encouraged and determined to continue struggle against British rulers. As a result Marsha law was imposed by British rulers to control hur movement. Pir Sahib made Grange Bungalow as his general head quarter. He with planning recruited his followers for armed struggle. They were trained for fight and to continue armed struggle. This act of Pir Sahib raised slogan “home land or death”. After the arrest of Pir Sahib Hurs increased their activities against Government.
Please download Java(tm).

Hurs started attacking Police stations, Government buildings, Railway Stations, Telephone System and irrigation system to paralyze Government and to pressurize Government to release their spiritual leader. Government as a result started arrest of Hurs and their leaders. Governments established false cases against them and punished them heavily after summary trials.

Pir Sahib had succeeded in telling his intensify their struggle and activities if he is arrested. Railway train Lahore mail was derailed by Hurs on 16th may 1942.
When Hurs attacked army or police they raised slogan of “Bheg Pagara” . To crush Hurs, Grange Bungalow their center was bombarded and destroyed on 26th may 43. Lastly he was arrested on 24th October 1941 & was sent to seoni in India jail. Dargah Sharif & bungalow in pir Jo Goth were also destroyed in 1943.
In 1942 the important leaders of hur Jamat were also arrested. Pir Sahib was brought back from Seaoni to Sindh in January 1943 and was arrested in Hyderabad central jail. The hurs made makhi forest as their base for activities. Government when failed to control struggle by land forces, started air bombing over grange bungalow, makhi forest and Dargah Sharif.

Hurs were ordered them not to give daily attendance instead become absconder and to continue struggle and activities. Government ultimately arrested thousands of hur leaders along with their families and kept them in concentration camps [where attendance was taken in morning and evening].They were in camps till 1952 when the present Pir Sahib Pagara was crowned and Gadi was restored.
Posted by Chief Editor at 5:07 PM No comments: Links to this post

Email ThisBlogThis!Share to TwitterShare to FacebookShare to Pinterest
Labels: Pir Sahib Pagara, Who is who in Karachi
Older Posts Home
Subscribe to: Posts (Atom)