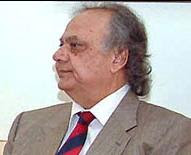 FIA Crime Circle has rounded up the former chairman Pakistan Steel Mills (PSM) Moin Aftab Sheikh from the home of his daughter on four charges of corruption – worth of billions of rupees, here in Defence Housing Authority late on Tuesday night.

According to FIA team, he was hiding in his daughter home in Karachi for fear of detention when the crackdown was launched in view of his arrest warrants issued in four corruption cases being under trial in courts and he sought bail before arrest. He was an absconder from Rawalpindi, sources said.
Posted by Chief Editor at 8:34 AM No comments: Links to this post