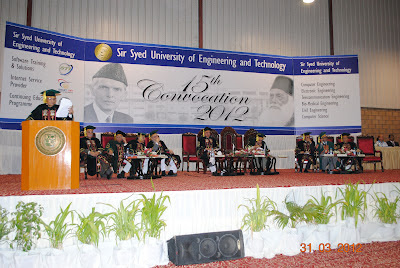 “Sir Syed University of Engineering & Technology has been playing a major role during the last two decades in equipping the youth with technical education . The SSUET graduates are serving in various countries of the world with placement on highly important positions and making new breakthroughs not only in Pakistan, but also in Europe, America and other countries”, Engr Z.A. Nizami, Chancellor SSUET, observed while addressing the 15th Convocation of the university held at Karachi Expo Centre on March 31.

At the convocation over 1,000 graduates of batch 2008 were awarded degrees in the engineering disciplines of Electronics, Computer, Civil, Bio-Medical and Telecommunication besides Computer Science..

The Chancellor said that it’s our strong conviction that good Engineers and Technologists can combat the forces that are responsible for weak economic conditions of the country and financial constraints in the domain of progress. They can find ways and means to transform poverty into plenty, he observed 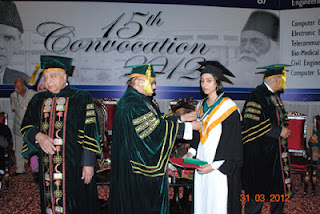 He asdvised the new gaduates to come forward to accept the challenges, which the country is confronting like dwindling down energy and water resources, dependence on foreign reliance and primitive systems and machinery in industry, which are the menace plaguing the country.

He emphasized on need for effectively exploiting the country’s latent natural resources like huge deposits of coal at Thar as well as copper and other valuable minerals in other parts of the country so as extract the country from economic turbulence and attain self autarky in every strata of national life.

Presenting the annual report, Vice-Chancellor Prof Dr Sayed Nazir Ahmed highlighted the successful journey of Sir Syed University from its inception in 1994 to its present glorious stage and informed the audience that SSUET’s annual budget has soared from Rs. 17.22 million in 1994 to a record Rs. 712.3 million in 2012.

He said the university provided Rs. 370 million worth equipment for Labs in all the Departments and spent Rs 195 million on new buildings and structures.

He stated that besides a financial assistance of Rs 10 million and Rs 40 million worth scholarships to deserving and talented students during 2011-2012, the university also provided Rs. 7.7 million to needy students and Rs 2.3 million to deserving employees.

He pointed out that the university, which started with merely 200 students in 1994, today has over 5600 students on roll and gave around 9820 graduate engineers to the nation since 1998, when its first convocation was held. 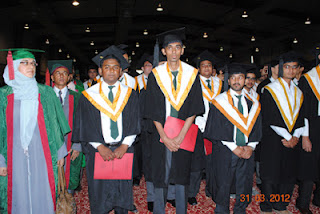 At present the university is dispensing 6 Bachelors Degree, 6 Master's and 02 PhD programs while its faculty has 22 PhDs teaching in various departments while as many as 15 faculty members are pursuing PhD degree from this university and as many number had gone abroad for higher studies, the Vice-Chancellor stated..

Dr Nazir informed that the University supports its Alumni, in their Career Planning and Placement and out of about 8660 graduates till 2011, 77% had been employed in gainful jobs while remaining proceeded for higher studies or started their own business.

The proceedings started with recitation of Holy Quran and Naat by the university students.

As the ceremony reached near completion, the graduating youth celebrated their award of degrees with tossing their robe caps into the air while excited youth posed for photographs with their parents.
Posted by Chief Editor at 12:26 PM