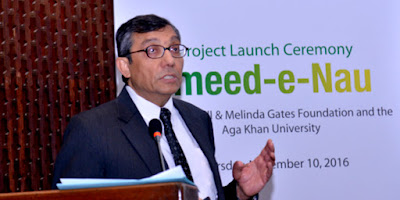 Funded by a US$25 million grant from the Bill & Melinda Gates Foundation, Umeed-e-Nau (new hope) is a five-year project that will see AKU work with public sector programmes and primary care providers such as Lady Health Workers and Community Health Midwives to deliver proven interventions and improve the quality of care at health facilities in 14 mainly rural districts in Balochistan, Southern Punjab and Sindh, as well as urban slums in Karachi.

The project also includes a ground breaking effort to provide health education through schools for adolescent girls in Pakistan.

“Federal and provincial governments, public and private institutions, civil society and every one of us have to team up to meet the United Nation’s 17 Sustainable Development Goals (SDGs) by 2030,” Professor Zulfiqar Bhutta, Founding Director of the Aga Khan University’s Centre of Excellence in Women and Child Health, remarked.

The project will operate through a new research centre, the Centre of Excellence in Women and Child Health, which will be established through a generous gift of Rs 2 billion from the Hashoo Foundation. Muhammad Ayub Shaikh, Secretary, Ministry of National Health Sciences, Regulations and Coordination, Government of Pakistan, expressed their commitment to join hands with AKU and accelerate progress.

“Umeed-e-Nau will test a variety of approaches in an effort to develop insights and evidence that can influence policy across the country and beyond its borders. We believe that the project will reduce stillbirths and new born deaths by 20 per cent, as well as deaths from pneumonia and diarrhoea by 30 per cent through these strategies,” Professor Bhutta reckoned.

On the occasion, a message from Dr Christopher Elias, President of the Global Development Program at the Bill & Melinda Gates Foundation was delivered:

“We are proud to support Pakistan’s efforts to improve the quality and reach of health services to reduce preventable deaths and make progress toward the country’s 2030 development goals.”

The AKU President Firoz Rasul thanked the Bill & Melinda Gates Foundation for its partnership and support to improve maternal and child health in Pakistan.

“As part of its activities to support the Sustainable Development Goals, AKU has pledged to invest more than US$85 million over the next decade in support of the Global Strategy for Women’s, Children’s and Adolescents’ Health, which is designed to help achieve Goal 3 of SDGs,” President Rasul said.

The ceremony was also attended by AKU donors, members of the Hashoo Foundation, and Dr Muhammad Usman Chachar, Secretary of Health, Government of Sindh.
Posted by Chief Editor at 5:09 PM Links to this post