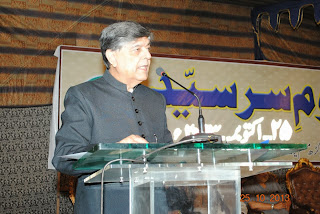 The Aligarhians have vowed to continue to carry forward the mission of great reformer and educationist, Sir Syed Ahmed Khan who devoted his entire life for emancipation of Muslims of South Asia and Islamic renaissance.

The commitment of Aligarhians came in this regard on the occasion of Sir Syed Day marking the 196th birth anniversary of great reformer Sir Syed Ahmed Khan, observed under the auspices of Aligarh Muslim University Old Boys Association (AMUOBA).

“The steps taken by AMUOBA and its members will continue to carry forward the mission of Sir Syed Ahmed Khan,” said Engr Mohammed Adil Usman, President AMUOBA and Chancellor Sir Syed University of Engineering and Technology while addressing the Sir Syed Day function held at AMUOBA’s headquarters in .

He said that the AMUOBA observed Sir Syed Day every year to pay homage to Sir Syed Ahmed Khan and to refresh the minds of younger generation about the life and achievements of the great reformer who brought a revolution among the Muslims of South Asia and which finally led to the creation of .

“The objective is to continue with the struggle to further propagate the educational perception propounded by Sir Syed,” Chancellor Adil Usman said and added that the life of great reformer was rich with the implementation of mission for the aforesaid cause.

“He is our role model and will continue to be so and the AMUOBA will keep moving forward for the fulfillment of Syed’s mission and the implementation of his thoughts and ideology.” he declared.

Earlier noted intellectuals, researchers and writers in their speeches shed light on the life and achievements of Sir Syed Ahmed Khan and said that today again the nation needs another Sir Syed who could emancipate it from its present day vows and tribulations. 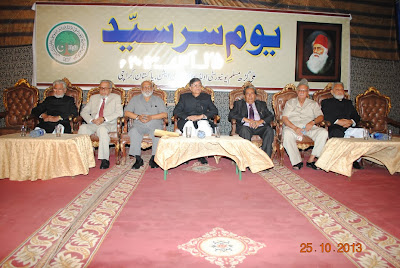 Mohammed Umer Khan, a SSUET student earned big applauds when he spoke on the life and history of Sir Syed Ahmed Khan and his contribution towards Islamic renaissance in .

Prof Waqar spoke at length about Sir Syed’s efforts for promotion of the cause of Urdu and particularly the establishment of Scientific Society which was reflective of his wisdom and farsightedness.

He pointed out that Sir Syed’s visit to London too was for the cause of Urdu  and where he conceived the plan for publication of  “Tehzib Iskhlaq” through which he later brought a mental revolution among the Muslims of South AAsia.

Azad Bin Hyder recounted the researches carried out by Muslims in the fields of science and medical and which was practiced by .

He cited an example of Dr Hamidullah whom the French government assigned the translation of Holy Quran in French and the then President Gen De Gaulle approved unlimited budget for the purpose.

Noted Journalist and poet Mahmood Sham in his thought-provoking speech pointed out that the was established for the sake of a bright future of the Muslims and through his mission Sir Syed Ahmed Khan brought a change in the very complexion of sub-continent.

“Today we are remembering the great reformer at a time when we are again a victim of unfortunate conditions,” he pointed out adding that once again we need a Sir Syed who could lead us to emancipation.

He said the nation cannot get rid of selfishness and personal gains unless the very spirit of Sir Syed Ahmed is revived.

Prof Sehar Ansari described Sir Syed a revolutionary personality and said there could hardly be anyone who would not be aware of his greatness, farsightedness and services and his wisdom and foresight emerged as guiding principles for the Muslims.

Khawaja Razi Hyder said the sub-continent cannot brig to fore an example matching the achievements of Sir Syed. He said no one can envelope his multi-faceted personality. He promoted educational thinking and provided a thoughtful base.

At the end of his presidential speech, Engr Adil Usman recounted the services of late SSUET Chancellor and President AMUOBA, Engr Z A Nizami, and late General Secretary AMUOBA, Engr Zakir Ali Khan, for their contribution towards propagation of the mission and the cause carried forward by Sir Syed Ahmed Khan and said that establishment of Aligarh Institute of Technology and Sir Syed University of Engineering and Technology was reflective of their efforts made with the contribution from AMUOBA members.

The function ended with a vote of thanks presented by General Secretary of the AMUOBA, Mukhtar Ahmed Naqvi.