Police on Monday stopped Sindh Transport Minister Akhtar Jadoon at the Karachi airport when he failed to show licences for weapons found in a car that had come to pick him up, reported a private TV channel. According to the channel, the PPP minister was stopped when he was leaving the airport after flying in from Islamabad. Police asked the minister to show licences for a pistol and a Kalashnikov found in his vehicle. Jadoon admitted that the weapons were his, but said he did not have the documents on him, claiming “they are home”. He asked police to “cooperate” and let him go. But the policemen refused, and said he could leave the airport only after showing the licences.
Talking to the channel, Minister of State for Ports and Shipping Nabeel Gabol praised the police team, and said any one keeping unlicensed arms should be sent to jail, “even if he/she is a minister”. He said, “It was absolutely wrong that the minister did not have the licences, which he should have.” He said action should be taken if the minister did not possess the licences. The channel later reported that the minister was allowed to go home to fetch the licences. daily times monitor
Posted by Chief Editor at 4:41 PM No comments: Links to this post

Sindh Governor not being changed: Malik 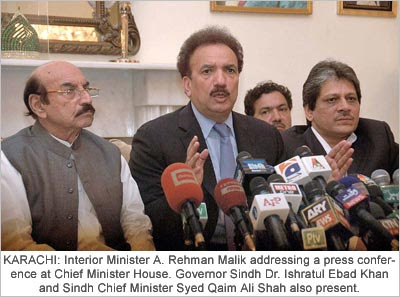 Interior Minister Rehman Malik said yesterday that Sindh Governor is not being changed and rumors in this regard are baseless.
President Asif Ali Zardari and Prime Minister Yusuf Raza Gilani have also refuted the rumors about such a change, he said while talking to newsmen after having a meeting with Sindh Governor Ishratul Ebad Khan at the Governor’s House, here. During the meeting, the leaders discussed prevailing peace situation in the province, particularly in Karachi. “Sindh Governor Ishratul Ebad Khan is not being changed as he is standing with me,” Malik confirmed.
President Zardari and Altaf Hussain have contacted with each other and there is full understanding between them. “There will be zero tolerance of the government about target killings. Stern action will be taken if any kind of such incident happens, ” he warned.
Posted by Chief Editor at 2:47 PM No comments: Links to this post