The immediate goal before the PIA management is to bring down the average age of its fleet and improve reliability and punctuality with on time departures and arrivals besides providing world class customer service. 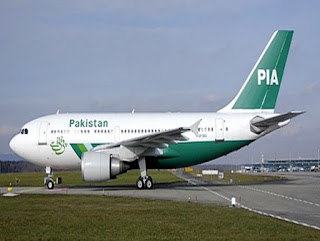 A PIA Spokesman informed the PNFS on December 6 that the airline, under the present management which barely had few weeks, has started a process of fleet modernization and revamping of its entire service to achieve turn around in shortest possible time with its new business model.

"Already the airline has entered the operating profit during the last two months-September–October 2012,” he disclosed.

He clarified that PIA has not finalized particular type of aircrafts, adding that tenders have been floated for acquiring five narrow body aircraft with delivery of at least four in first and the fifth one in the second quarter of 2013 so as to cope with the capacity shortfall.

PIA has received offers for both Airbus A320 and Boeing 737-800. However, A320 offers are larger in number as compared to Boeing 737-800. Presently, these offers are being evaluated and no final decision regarding induction of either narrow-body aircraft has been finalized. 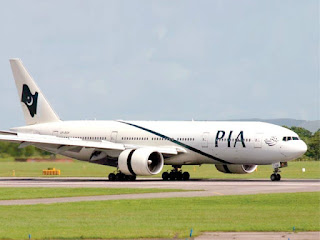 He made it clear that the tender for these aircrafts has not yet been awarded and the evaluation process was still not complete. It is, therefore, premature to assume which aircraft or engine type will be inducted.

“Speculative reports create undue bias for evaluators and they may not be in the best interest of the national airline,” the spokesman felt.

He said it was for the first time in PIA’s history that their Managing Director, Mohammad Junaid Yunus, invited Transparency International Pakistan to monitor the bidding process.

In addition to TIP, representative of the Ministry of Defence, Employees’ Unions including SAEP were also present in the financial and technical bid opening process while TIP was taken onboard during the evaluation process relating to not just this tender but in fact all future tenders would be forwarded to TIP for scrutiny. 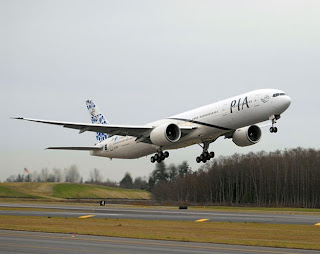 According to him, PIA was spending 55 percent of its revenue on fuel. Newer an aircraft provided fuel savings up to 50% for a route flown as well as lower maintenance costs.

He said PIA is following a clear point-based system where points are awarded based on fleet commonality and availability of present apparatus for overhaul of engines.

The spokesman said that PIA would not go for one criterion, especially with the rapid advances in technology in aviation. What matters is the cost benefit analysis of these aircraft and therefore financial cost and availability of these aircraft also play an important role, he said adding that PIA cannot afford to wait years on end to suit the schedule of a particular vendor or manufacturer.

It is pertinent to mention that any further delay in the induction of new aircraft will result in the delay of the turn around of the airline, which was noted by the Board of Directors and Government Pakistan, he concluded.
Posted by Editor at 10:55 PM

MoU for energy conservation signed between PIA and KESC


Managing Director PIA, Mohammed Junaid Yunus has said that the airline management is committed to implement Energy Conservation Program, not due to high energy cost, but as a social responsibility for rational power use. 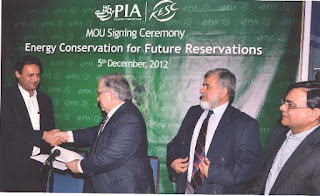 He was speaking at the MoU signing ceremony between the Pakistan International Airlines (PIA) and the Karachi Electric Supply Corporation (KESC) for Energy Conservation held at the PIA Headquarters in Karachi on December 5.

The MoU was signed by Capt Junaid for PIA while Tabiss Gohar signed for KESC. He said that PIA’s Green Team is working for Safe Environment for future and the saving achieved will help minimize cost, time and resources.

"We are committed to protect the environment and comply with environmental laws, regulations and methods of conservation,” he remarked. Speaking on the occasion, CEO KESC Tabish Gohar described PIA a potential customer of KESC and said the power utility looks forward for strengthening the existing relationship between the two organizations.

KESC, he assured, will fully corporate with PIA in saving energy cost through cost cutting measures. Although it may reduce KESC's revenue but saving of important resource will be of great benefit, he added.

KESC's Director Energy Conservation, Asif Siddiqi, in his remarks, pointed out that that PIA would save 30 percent in its electric bills by introducing energy conservation programme at its Head Office and Training Centre.

It may be mentioned here that PIA is currently spending about Rs 50 million a month on power consumption at its head Office and Training Centre and by implementing energy conservation plan it is expected to save around Rs.200 million annually in its electricity bills.

MD PIA Junaid Yunus explained that the PIA Green Team has worked tremendously on power conservation during the last couple of years which saved Rs 7 million in diesel consumption last year despite rising cost of diesel.

He said PIA saved another Rs 3 million in one month as compared to September 2011 by rationalizing office timings.

He assured KESC of full cooperation during Energy Audits and also for technical collaboration in matters of energy and environment conservation.
Posted by Editor at 12:56 PM