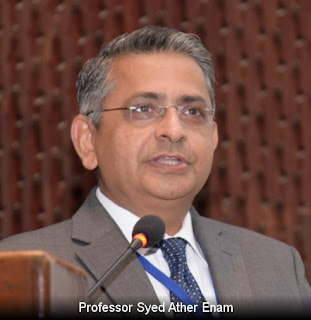 The President of Pakistan, Mamnoon Hussain has conferred prestigious awards on two senior professors at the Aga Khan University (AKU) in recognition of their outstanding services to the profession.
Professor Syed Ather Enam, Chair of the Department of Surgery at AKU, has been awarded Pakistan’s third highest civilian award, the Sitara-i-Imtiaz, for his work in the field of medicine.

Professor Zulfiqar Bhutta, Founding Director of the Centre of Excellence in Women and Child Health at the University, has been honoured with a Pride of Performance Award for his contributions to healthcare education.

The announcement was made on Independence Day, August 14, 2016, where the President conferred awards on a number of Pakistani citizens and foreign nationals for demonstrating excellence in their respective fields.

Speaking about the awards, Farhat Abbas, Dean of the Medical College at AKU, said: “Throughout their careers, Dr Enam and Dr Bhutta have upheld the highest standards in their respective fields. A generation of surgeons and researchers has honed their skills under their supervision and are making an impact in their chosen fields of service. I congratulate them both on this richly deserved honour.”
Posted by Chief Editor at 3:06 PM Links to this post