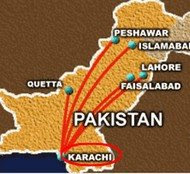 KARACHI: A teenage boy was killed while two others sustained injuries due to celebratory aerial firing carried out by a wedding party in Baldia Town.

The deceased and the injured were returning home from work, when they were hit by bullets fired by a wedding party within the limits of Saeedabad police station.

The victims, identified as Noman Mobin, 14, Asad Hanif, 19 and Kashif Shafiq 26, were taken to Civil Hospital, Karachi (CHK) where Noman succumbed to his injures while receiving treatment. All three boys worked at a marble factory and were friends. Meanwhile, area residents informed the police and gave the number of the vehicle in which the gunmen rode. The police chased the vehicle and arrested a man named Dawood, and also recovered a weapon from his possession. A case has been registered.

Woman stabbed to death: Zubair Khan, 35, tried to commit suicide after he stabbed and killed his wife. Khan, a labourer by profession married Niazo Bano, 25, recently. Bano left for her parents’ house after a domestic dispute with Khan. The incident took place on Sunday night at Sector 7, Afridi Colony within the limits of Baldia police station. DSP Sahib Ali Shah said that Khan went to his in-laws house to get Bano but he was unable to convince her. Upon her refusal, he stabbed her with a knife and then tried to kill himself. Both injured were shifted to Abbasi Shaheed Hospital where Bano succumbed to her injuries.

Man dies in road mishap: A man died while his wife and two-year-old son were wounded when a speeding truck knocked over his motorbike within the jurisdiction of SITE police station. Police officials said that a loading truck hit the motorbike and as result the couple and their toddler sustained injuries. The victims were taken to Abbasi Shaheed Hospital where doctor pronounced the death of Mohammad Zada, 30. Meanwhile his wife and child have been admitted there with critical injuries. Police have arrested the errant driver, Shabbir, and seized the truck.

Man electrocuted to death: Sultan Khan, 24, was electrocuted within the jurisdiction of Boat Basin police station. Police officials said the deceased was an electrician and died while working in Shireen Jinnah Colony.

Child dies as roof collapses: Bilal, 6, died when the roof of his house fell on him within the limits of Chakiwara police station. His body was taken to Civil Hospital Karachi (CHK) from where his family took it away without legal formalities.

Stray bullet victim passes away: Irfan Khan, 24, who had received bullet wounds by a stray bullet, succumbed to his injures during treatment at CHK.
Posted by Chief Editor at 1:52 PM No comments: Links to this post