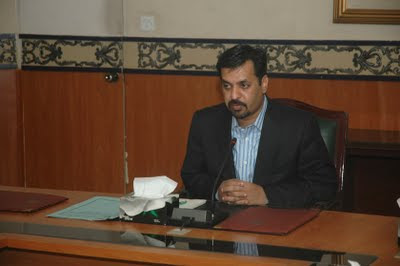 City Nazim Syed Mustafa Kamal has warned the officers of city government to avoid unusual delay in the completion of development works or they will have to face strict disciplinary action.

During a review meeting held at the KWSB Chairman Office on Tuesday, City Nazim took serious notice of the slow pace of work on the ongoing projects and viewed that lack of interest of the concerned officers and bribes were the main reason behind unsatisfactory speed of work and the citizens were facing hardships despite of timely payments to contractors.

City Nazim further said that he had visited ongoing development projects in the city on Monday and Tuesday and found the speed of work unsatisfactory. Construction of over head pedestrian bridges was one such example of this sluggish pace of work.

He said that despite of financial problems City Government ensured provision of funds and resources for these projects specially construction of pedestrian bridges so that the citizens could be provided convenience in crossing roads but the concerned officers were not showing interest in the early completion of the projects causing unusual delay in the works.

Nazim Karachi said that construction of 23 pedestrian bridges has been going on since last three months. Despite of payment of Rs200 million, pace of work on these projects has not been accelerated.

He also said that due to the bargaining for commission at higher level, contractor firms were not receiving payments on time and that is why they were not taking interest in development works and the situation causing delay in the completion of works.

He again warned all those officers to mend their ways or be prepared to face the disciplinary action. Citing the example of EDO Iftikhar Qaim Khani who has been removed from his post for committing negligence in his duty, he said that more officers will be removed from their post in next few days.
Posted by Chief Editor at 10:40 PM No comments: Links to this post