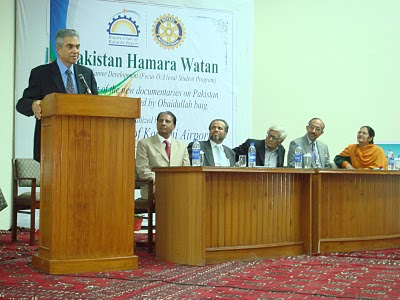 In his welcome address, Anwar Jabeen Qureshi, President, Rotary Club of Karachi Airport, observed that the screening of the new documentaries on Pakistan for the first time, produced and directed by the popular figure of Mr Obaidulla Baig, will go a long way in inspiring the youth and helping them become more responsible citizens.

“Rotary Club of Karachi Airport has taken the initiative of spreading the message among the students who hold the key to the future of Pakistan. These documentaries tell us how much resourceful and blessed country Pakistan is and we need to be more patriotic at all times,” he added.

Brig (R) Ifikhar Arshad Khan, Director Education, DHA, paid rich tribute to Mr Obaidullah Baig describing him as an iconic figure in the literary and scholastic circles whose words and deeds are a source of inspiration to the country. 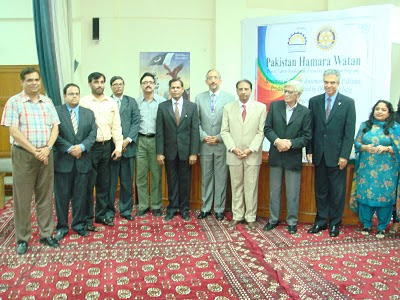 He lauded the efforts of Rotary Club of Karachi Airport particularly the Humara Watan programme having been specially developed to bring about awareness and importance of our country Pakistan.

Mr Obaidullah Baig was accorded a standing ovation by the students and the dignitaries when he arrived at the podium to deliver his speech that itself was laden with golden words.

He complimented Rotary Club of Karachi Airport for screening his documentaries that convey the message that the country is blessed with numerous resources ranging from agriculture, minerals, historical sites and above all the country has five seasons.

“These documentaries are basically meant to project Pakistan’s image and convince the younger generation that Pakistan has its own tremendous worth and there be no dearth of talent provided we value our country and own it to be recognized as Pakistanis in the true sprite,” he added.

Mr Aziz Memon, who presided over the ceremony, did not mince words in stating that an under-developed country like Pakistan needed to enhance literacy rate to make significant progress and be counted as a front-runner in an era of stiff competitions.

He praised Mr Obaidullah Baig for doing such a wonderful project that highlighted the glorious traditions of country, urging the youngsters to work hard and lead from the front to accomplish their cherished goals.
The chief guest of the function, Mr Faiz Kidwai, showered Mr Obaidullah Baig for taking the time out to develop such fascinating documentaries that are informative, inspirational and recreational.

He hoped that such efforts will be immensely helpful in boosting the image of Pakistan that had been tarnished by the people with vested interests in the past.

The ceremony was held at the auditorium of the DA Degree College for Women in which a large number of teachers and students were in attendance besides the Rotarians.