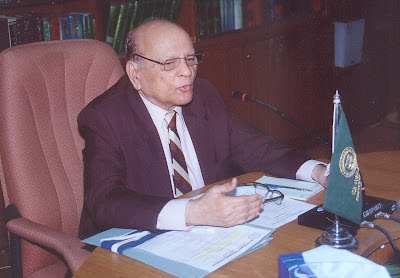 The Chancellor Sir Syed University of Engineering and Technology, Engr Z A Nizami, has expressed the strong conviction that the qualified engineers and technologists can combat the forces responsible for weak economic conditions of the country and financial constraints in the way of progress.

“They do have the capacity to find ways and means to transform poverty into plenty”, he observed in an interview.

The SSUET, he pointed out, has been playing a major role in equipping the youth with technical education during the last two decades and today its graduates were working on highly important positions in the national and multi-national institutions.

“They are serving in army and civil departments successfully and working as researchers, innovators and making new breakthroughs, not only in but also in Europe, US and many other foreign countries like and ,” he added.

The university, he said, is working under a well managed system and in order to achieve its outlying objectives, its strategies are developed in the light of growing demands and technical knowledge.

Referring to the progress achieved during the last couple of decades, Chancellor Nizami informed that starting with a budget of mere Rs 17.22 million in 1994, its annual budget today stood at Rs 712.3 million.

Since its inception, he said, the university has provided latest equipment worth Rs 370 million to its laboratories besides spending Rs 195 million on buildings and structures – and all this without any financial assistance from the government.

Engr Nizami said the performance of the university can be judged from the spate of admissions being sought by students not only from but any parts of the country. He said this year 3878 applications were received for admission to six engineering disciplines. Of them 374 applicants had secured above 80 percent marks, 1381 above 70 percent marks and rest above 60 percent marks.

He pointed out that starting with a strength of only 200 students in 1994, SSUET today has over 5600 students on its roll and since 1998, this institution produced around 9820 graduate engineers.

At present, he said, 22 Ph.Ds were serving as faculty members in various departments of Computer, Civil, Electronics, Bio-Medical and Telecommunication engineering besides Computer science while 15 faculty members were pursuing Ph.D programs from this university and a same number pursuing higher studies abroad.

Replying a question, the Chancellor said that the university was founded under the very mission and vision of great educationist and reformer Sir Syed Ahmed Khan and as such no student is rejected admission merely because of his/her financial constraint.

Engr Nizami reiterated that SSUET was the outcome of spirit, which had been inculcated in the members of Aligarh Muslim University Old Boys Association (AMUOB), the sponsors of the university, during their stay at .

He said that the AMUOBA had the strong feeling that education and particularly the technical education provides solution for all the problems of and they wanted to establish the university in conformity with the philosophy of Sir Syed Ahmed Khan and their success crowned in 1994.

The Chancellor pointed out that in order to adorn the students with spirit, the Aligarh Movement is being taught as a subject in the SSUET.