“Due to one of the longest ever holidays’ spell during Eid-ul-Fitr, the country has remained cut off from the rest of the world for the whole week having halting all kind of trade and exports with foreign countries.”


While commenting on the long spell of Eid Holidays together with weekly holidays, the LCCI President said that due to these nine-day holidays, the industrial and commercial activities were stopped thus rendering heavy losses to the national exchequer, besides no contact with international business community for more than a week, which is not desirable for a country like Pakistan, whose economy is already in oxygen tent.


He argued that if taken one day’s exports as $71 million on the basis of Pakistan’s total annual exports of $26 billion, we have lost over $356 million in just five days.


“The government has made it a precedent to declare long holidays just to please government employees who already do not have tendency to work honestly,” Ismail Sattar observed.


He also pointed out that due to these long holidays, the public resorted to unhealthy activities causing great losses, as was evident from the tragic incidents at the Sea View Beach in Karachi and the terrible traffic jams at Murree and other big cities.

The business leader urged the power-corridors in Islamabad to refrain from allowing such a long spell of holidays, which the nation cannot afford both economically and socially, as the public resorts to unhealthy practices in the name of entertainment, which the local administrations of big cities are not fully equipped to cope with such abnormal public activity thus causing great losses of life and property.

The Quran Khawani and Fateha for  Esal-e-sawab of prominent trade unionist and woman activist, Zaibunnisa Shanta Bukhari was held at the residence of her son Munawwar Sultan Bukhari.

It was largely attended by people from various walks of life including trade union leaders, activists, friends, relatives and senior journalists. Zaibunnisa had passed away on 27th Ramazan at local hospital.

She was the wife of Comrade Jamaluddin Bukhari and mother of Dr Muzaffar, Munawwar Sultan, Mukarram Sultan, Moazzam Sultan (APP Correspondent at Larkana) and Hakim Bukhari.

On the occasion prominent participants spoke about the life, achievements and contribution of late Zaibunnisa Shanta Bukhari.

Both Munawwar Sultan Bokhari and Mukarram Sultan Bukkhari had worked as correspondent of the Associated Press of Pakistan (APP) at Larkana. Munawwar Bukhari is a former civil servant and Chairman Larkanians while Mukarram Bukhari retired from KDA as Director a couple of years ago. 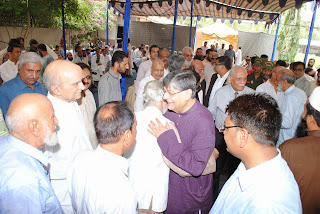 The Chancellor of the Sir Syed University of Engineering and Technology (SSUET), Karachi, Engr Mohammed Adil Usman, hosted a grand Eid Milan get-together at the university campus on August 1.

“It is in keeping with the traditions of Aligarh,” Engr Adil Usman, who is also the President of the Aligarh Muslim University Old Boys Association (AMUOBA), stated in a brief remark on the occasion.

Conspicuous with their presence were a large number of prominent members of Aligarh Muslim University Old Boys Association. The participants also included members of the Administration department besides a good number of womanfolk.
Posted by Chief Editor at 6:36 PM

SANA Convention in Chicago from August 29 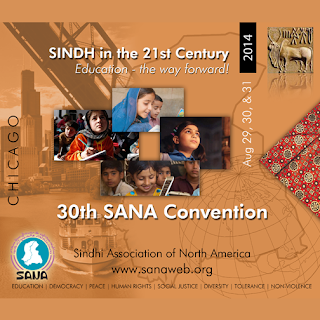 The local organizing and executive committees of the Sindhi Association of North America (SANA) held a meeting, chaired by its President Jamil Daudi, in Houston to review and finalize the arrangements of the upcoming Sindhi diasporas annual cultural and social get together.

The SANA arranges a mega annual event for Sindhi diasporas every year and this time its 30th Convention is being planned to be held from August 29 to 31 in Chicago under the theme of “Sindh in 21st Century; Education-the way Forward.”

In the meeting, the SANA General Secretary, Noor-ul-Nissa Ghaghro, and Chairman Convention’s local organizing committee, Dr Khalil Memon, Dr Aijaz Turk and Dr. Valeed Shaikh apprised the participants that 120 Rooms were arranged at Westin O’Hare Hotel, the venue of the meeting, which were booked by intending members from the community immediately and the demand for more rooms was received from all over North America and other parts of the world.

They said that keeping in view the demand, some 40 more rooms have been arranged at another hotel in Chicago, Marriott Suites O’Hare, which is just across the road of venue.

They further informed that the participation of civil society members from Pakistan including Kaiser Bengali, Jahangir Siddiqui and Sadiqa Sallahuddin have been confirmed while visa applications for Abdul Hameed Akhund and Zameer Ghumro were in process.

As per schedule, the event will start with a cultural show on the evening of August 29 after the registration of participants. The Sindhi youth will present tableau and cultural show will be arranged in the session followed by a light musical show.


The second day (August 30) will be starting with a medical camp to facilitate participants with diagnostic service and a seminar on health issues. Thereafter a session will be arranged to highlight the role of ‘Sindhi Woman in 21st Century’ to be organized by the SANA Vice President, Shahida Soomro. The noted educationist and poetess, Sahar Imdad, will be keynote speaker in the session.

The SANA general body, during the lunch break, will meet to discuss issues of community and its members and chalk our strategy to bring community close to each other.

Later in evening, a literary session and mushaira will be held to be presided over by the veteran poet, Imdad Hussaini, with the participation of Secretary General Sindhi Adabi Sangat, Dr Mushtaq Phull, and other noted writers and poets. 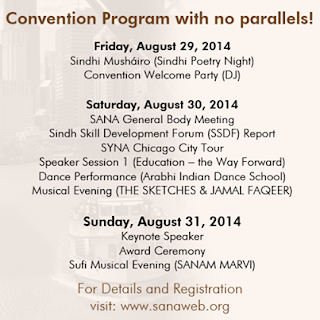 At night, a show of an enchanted Sindhi sufi music will be arranged for which the availability of famous Sindhi and Urdu language singer Sanam Marvi and world known sufi vocalist Jamal Din Faqeer with his group has been confirmed.

For the third and final day (August 31) two separate sessions have been planned to brainstorm and discuss the issues and causes of declining standards of education in Sindh. The convention will be concluding with a grand musical show.

Whereas the get-together includes tour of historical city Chicago’s famous places and other very interesting educational and career counselling based programmes for youth participants of the Sindhi diasporas.

The meeting also discussed the process of upcoming elections of central body and decided to fix September 15 for the renewal of membership or to done with the membership of newcomers. The executive committee called upon all its regional secretaries belonging to different parts of USA and Canada to mobilize community in membership drive to bring maximum possible community members under the umbrella of SANA.
Posted by Chief Editor at 6:33 PM