‘Land mafia behind new wave of killings in Karachi’ 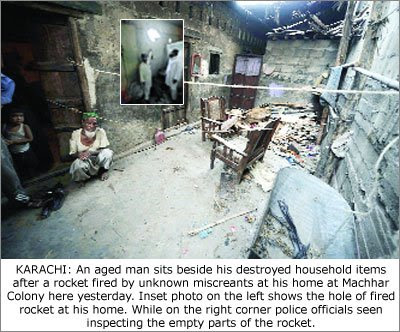 LONDON: The Karachi land mafia is behind the new wave of killings in the city, Sindh Education Minister Pir Mazharul Haq has claimed.

‘The mafia is playing the three coalition partners, the PPP, the MQM and the ANP against each other with these blind, but broad daylight murders,’ he said while talking to Dawn.

The minister who was on his way to Germany via London to attend an education conference also claimed that the purpose of the land mafia was to keep the coalition government unsettled enough to be able to carry on its nefarious activities without let or hindrance.

‘They have the money and the fire power and Karachi’s land is gold mine. They buy people and those not on sale they terrorise and those who refuse to be terrorised they kill,’ he said.

But where is the government? He was asked. ‘We are doing our best. We have formed committees, there is a core provincial committee comprising five MPS each from PPP and MQM, and there is also one federal core committee comprising two MNAs each from PPP and MQM. We meet regularly and try to put out bilateral fires. We need to have similar arrangements with the ANP as well,’ he added.

He said every time Asfandyar Wali Khan and Altaf Hussain talked to each other on telephone it would be followed by a new wave of killings which he said indicated that there was a hidden hand which did not want the MQM and the ANP to reach an understanding.

He was not sure how the May 12 strike call given by the ANP and opposed by the MQM would play out and said he was keeping his fingers crossed, ‘I am sure the president would intervene and mediate between the MQM and the ANP’.
When his attention was drawn to the miserable plight of the education sector in the rural Sindh, he said he was aware of it and was trying to bridge at least the gap that has emerged in recent years between the rural and urban Sindh on the education front.

‘Recently I revived a multi-million-dollar World Bank programme which was discontinued in 2007 for recruiting teachers with the right qualifications,’ he added.

He also agreed with this correspondent that the physical infrastructure in the rural Sindh was in pathetic condition with even cities like Sukkur, Larkana having no suitable roads and there being no properly motorable link roads within the rural part of the province.

‘That is why many of our voters have started demanding that we hand over the rural Sindh towns as well to Mustafa Kamal,’ he said light heartedly.

He admitted that Mr Niamatullah Khan, the former Jamaat-i-Islami Nazim of Karachi, and the current one had done wonders with the city ‘and we hope those responsible for rural Sindh infrastructure would also do the same’.

‘You see most of the elected local councillors are not even matriculates and many are too unforgiving to govern even handedly. Some are said to have refused to issue death certificates to those whose family members did not vote for them. We cannot do much about them. They are protected under the sixth schedule which expires in August this year,’ he added.

He said the PPP was all for the revival of the deputy commissioner’s institution, ‘but the MQM says its does not want its extension to Karachi and Hyderabad. We are trying to get them on board’.

When asked why even meritorious students from the rural Sindh were not allowed admission in the prestigious institutions of Karachi like the Dow University of Health Sciences and the NED University, he said the provincial core group had taken up the matter with the governor.

‘We have proposed that a quota should be reserved in both the rural and urban institutions for students of the two parts of the province.

There is a rural quota in the Karachi institutions but it is reserved only for the city’s suburbs like Gadap,’ he added.
Posted by Chief Editor at 4:41 PM No comments: Links to this post