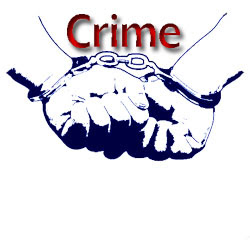 KARACHI: The police officials of Ibrahim Haideri have arrested a convict who allegedly disappeared after killing his 65-year old maternal grandmother at her house.

According to the police officials, a 65-year old woman identified as Sairah was killed by a dagger commonly used for chopping fish. Her body was found in her house located at Ali Akbar Shah Goth.

The police started an investigation on the directives of Bin Qasim SSP Abdullah Sheikh and found that the last two people who were seen in the deceased’s house were her grandson Ismail and his friend Sultan. Sultan, was a resident of Zaman Town, and depended on the pocket money that his grandmother occasionally gave him. Sairah was killed because she refused to give Sultan, who was unemployed, any money, which aggravated him. Sultan’s accomplice managed to escape but the police hope that they will catch him soon.

Gang arrested: Anti-Violent Crime Cell (AVCC) on a tip off arrested a gang of 11 criminals involved in a number of cases including robberies and kidnapping.

The police officials said that the ringleader was arrested in 1989 after murdering a Quaidabad Traffic Police Sub-Inspector Nazar Hussain and awarded a death sentence. Later, the sentence was converted into life sentence and the culprit was released from jail in 2004. After serving a fifteen year sentence, he was set free and he formed a gang. The police registered a case and started an investigation.

Child injured: Aerial firing at a wedding ceremony injured a four-year old girl. According to the hospital sources, Malika, four, daughter of Shiraz was injured by a bullet during a wedding ceremony being held in North Nazimabad No 4. It is also mentioned that the area police have yet to take stern action against the miscreants who were openly firing during the wedding ceremony.

Mobile market looted: Over one and half dozen shopkeepers in Orangi Town No 5 lost valuable items including mobile phones, scratch cards and SIMs worth Rs 15 million after a late night robbery on Sunday.

The aggravated shopkeepers staged a demonstration against the lack of security and stopped traffic in the area for a while.

Police sources told Daily Times that robbers using iron-jacks damaged the shutters of 17 shops in the Adnan Mobile Mall located in Orangi No 5 and robbed a large number of cell phones, scratch cards, SIM cards and other related accessories worth Rs 15 million. The shopkeepers found out about the robbery early morning on Monday when they reached the mall and found that their shops had been broken into and all the outlets were empty.

The police, on the behalf of market owner Haji Aslam, registered an FIR No. 419/2008 against unknown robbers and started an investigation on the matter. (Daily Times)
Posted by Chief Editor at 3:07 PM No comments: