City Nazim Mustafa Kamal has filed a constitutional petition in Sindh High Court (SHC) against orders of Sindh Chief Minister of slashing powers and not letting him to do work.

Nazim in his petition says the orders have been passed without legal formalities and he is not allowed to do work.
Posted by Chief Editor at 9:43 PM No comments: Links to this post 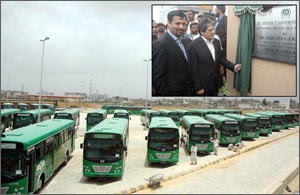 Governor of Sindh Dr. Ishrat-ul-Ebad Khan and City Nazim Syed Mustafa Kamal yesterday inaugurated the CNG Bus Pilot Project at Surjani Town. The Governor inspected the CNG Bus Terminal and also traveled through a CNG bus on this occasion.
Earlier addressing the inaugural ceremony Governor of Sindh Dr. Ishrat-ul-Ebad Khan congratulated the citizens of Karachi for getting another gift in the form of CNG buses. He also paid tribute to City Nazim Syed Mustafa Kamal under whose leadership the city government could perform such a marvelous work during the last four years.
He said that the City Nazim Mustafa Kamal has through his services proved that he is a true leader who has served the citizens with great fervor and spirit. Today, he has achieved another goal of providing the citizens with respectable and comfortable means of transport in shape of dedicated CNG buses.
The governor added that the city is most important part of the country while the City Nazim has ensured with his utmost dedication that the city must keep the wheels moving.
In his address, Nazim Karachi Syed Mustafa Kamal appealed to the President of Pakistan Asif Ali Zardari and the Prime Minister of Pakistan Yusuf Raza Gilani to help stop the bureaucracy at the federal and provincial level from creating impediments ahead of city’s development projects.
Kamal said further that hundreds of studies have been done so far but still the city is lacking its Mass Transit Program due to obstacles that the corrupt bureaucracy had always created.
Similarly, certain other viable public projects such as Bus Rapid System, Light Rail System and Circular Railway are still in pending.
He said that the CNG bus project is totally funded by City Government. Without taking even a single penny for the project from the federal or provincial government, we have spent Rs 250million on purchasing of these dedicated CNG buses while we have also allocated funds for purchase of another fleet of 100 buses in next budget, Nazim added.
Nazim Karachi said that in past diesel buses were introduced in Karachi by the name of CNG buses while we have completed all homework before starting the CNG bus operation. All required infrastructure was provided to these buses so that the project could be run smoothly and without any hurdle. He said.
Nazim Karachi said that it is hard for a city government to undertake a huge project like mass transit system. In all over the world the MST was done by the federal governments.
He however called it unfortunate that the city of Karachi despite of all the studies still deprived by the Mass Transit Facility.
He said that Karachi is the key city of Pakistan. It provides livelihood to labors from all over the country. We will continue development process in the city, he added.
The pilot project contains 50 dedicated CNG buses that would be plying on two routes initially. Two different manufacturers with 25 buses each have manufactured these CNG buses locally. The CDGK has already paid full cost of these 50 buses.
The purpose of plying dedicated CNG buses is to ensure most modern urbanized system of transport with complete self-esteem of the commuters. In this regard, the CDGK has already put to operate the e-ticketing facility, as there would be no bus conductor. The passengers should buy under self-service traveling coupons from e-ticket booths established at different locations on the prescribed routes. Provincial ministers, MNA, MPA, Town Nazims, DCO Karachi and other dignitaries were also present. (NC Report)
Posted by Chief Editor at 9:37 PM No comments: Links to this post