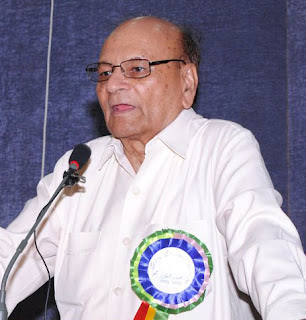 The Chancellor Sir Syed University of Engineering & Technology (SSUET), Karachi, Engr Mohammed Adil Usman has said that people of Pakistan and for that matter of Sindh and specially Karachi are greatly indebted to late Chancellor SSUET and former DG KDA, Engr Z.A. Nizami who gave this city the status of a world class metropolis and established an engineering university and an Institute of Technology in this great city.

“It is a ‘Sadaq-a-Jaria’ for he accomplished a task which was assigned to him by Almighty Allah,” he said while speaking as chief guest at a condolence meeting organized for late Z A Nizami at the Sadaat-e-Amroha in Karachi.

He said that the demise of Engr Nizami has created a huge vacuum which will be difficult to fill but as new Chancellor of SSUET and President of Aligarh Muslim University Old Boys Association (AMUOBA) he will leave no stone unturned to carry forward the mission undertaken by the late Chancellor.

“The university will continue to remind us of the services rendered by Engr Nizami and his memories will always refresh our hearts and minds,” he remarked.

Engr Adil Usman stated that it’s not possible for any human being to comprehend the “hikmat” of Allah who is the creator of this universe. It is He who selects His creation for the accomplishment of a task.

Recalling his old association with Engr Nizami, the SSUET Chancellor described him as his ideal and said he learnt a lot from him and he always found him very supportive and sympathizer who would meet every one without consideration of his/her cast, colour and creed and oblige them.

“I have score of examples before me when I found him helping the poor and destitute persons,” he added.

He said that Engr Nizami was a world class town planner who also gave suggestions to the Saudi Government with regard to expansion plans of Harmain Sharifain and Masjid-e-Nabavi (SAWW) and keeping their floors cool.

He said it was upon his request that Shah Faisal had ordered opening of the route reserved for Princesses during Haj for pilgrims-a task which Allah had approved to be taken through Engr Nizami.

Engr Adil Usman remarked that even after retirement as Director General of KDA, Engr Nizami did not sit idle and used his God-gifted vision for the welfare of “Khalq-e-Khuda”.

He said that Engr Nizami procured the land for the SSUET, getting it allotted from the then President and today this institution has so far produced over 10,000 engineers.

Keeping his services in view he was elected as President of AMUOBA for seven terms and held this office till his death.

He said that Engr Nizami was blessed with a very attractive and charming personality and he was particularly helpful to the needy students and would exempt them from payment of fee.

Engr Nizami, he said, made this university a “center of excellence” and students passing out from here were today serving in the USA, UK, Canada and Middle East and many of them were there for still higher education.

The Chancellor said that due to the efforts of Engr Nizami SSUET today has affiliation with many US and UK universities while in Karachi it’s also holding courses for Masters and Ph.D.
Posted by Chief Editor at 12:24 PM