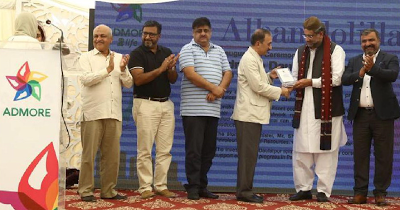 Talking to media on the occasion of inauguration of the Admore Daulatpur Oil Terminal, the Minister said that the China Pakistan Economic Corridor (CPEC) was the outcome of the efforts of the present government and it would prove to be a milestone for economic boom and development in the country.

The Minister regretted that the previous government didn’t initiate many projects during its five-year tenure while on the contrary the present government expanded the network of highways throughout the country, introduced new projects of Metro Bus, Orange Line besides power projects.

He said that Pakistan Muslim League (N) would field its candidates in the coming general election from all over the country and would win majority of seats to form governments in all the provinces on the basis of its performance.

He added that PML (N) was providing natural gas to cities, town and villages of Sindh and giving heavy subsidy of Rs 30 billion every month.

Speaking about the oil prices, the Minister informed that OGRA had proposed Rs. 2.50 increase in petroleum prices but government increased just Re one, adding  that OGRA proposed increase in oil prices nine times but the government increased the prices only three times. He stated that the oil prices in Pakistan were the lowest among the oil importing countries including neighboring country where it is being sold at Rs 140.

He revealed that the government has started supplying oil of international standard in the country and soon Euro three, four and five standard oil would be imported after deregulation process.

The Minister said that in the past just three to four oil supply companies were functioning in the country while present government has during its tenure issue 40 licenses to oil companies that has created environment of competition and benefit reached the end consumers.

The Chief Executive of the company, Nadeem Jaffery, Chairman, Lt Gen Shahid Iqbal, also addressed on the occasion. Minister Shahid Khaqan Abbasi later performed the opening ceremony of terminal and unveiled the plaque.
Posted by Chief Editor at 4:13 PM Links to this post