Sindh Chief Minister, Syed Qaim Ali Shah, has approved the establishment of KBCA police station and a special court with full powers to take action against violators of Karachi Building Control Authority (KBCA) and the notification in this regard was awaited from the provincial home department.

This was disclosed by Arch Manzoor Qadir, Chief Controller of Buildings, KBCA, in a media chat at his chamber in the Civic Centre on June 3.

“The individual violators have stretched to groups who over a period of time have developed into a powerful mafia and stern actions are required to overcome the mafia, he pointed out.

The KBCA, he said, remains determined to vigorously enforce relevant laws which need police assistance and which is not available to required extent from police department and, therefore, KBCA need an exclusive police station and KBCA special court for prosecution of violators besides magisterial powers to KBCA officials.

“We moved a summary to the Chief Minister in this regard, having explained that the attainment of our objectives would just remain a dream if we were not provided with the desired facilities", Manzoor Qadir said adding that "we proposed actions in the interest of the security of public investment well as for good governance".

The CCOB said approval of the summary indicates the realization of the fact that the KBCA must be empowered both in legal and physical terms in order to enforce the building laws that are grossly violated by mafia.

By approving the summary, the provincial government has agreed to confer all the powers of a special magistrate on three senior officers (BPS 19) or above of the KBCA who could perform their duties to check unauthorized construction in accordance with approved plan and ensure the enforcement of the court orders of ejection of illegal occupants from the premises constructed illegally.

He informed that provincial government has allowed the establishment of a KBCA Police Station on the patterns of the CDGK and the KESC with all powers exercisable by a Station House Officer under the provisions of the code of Criminal Procedure in respect of offences of the Sindh Building Control Ordinance and other applicable laws.

Similarly approval has also been accorded for the establishment of a KBCA Court for trial of offences or prosecution cases under Section 19 of the Sindh Building Control Ordinance.

It will also have the powers of civil courts to decide the disputes between the purchasers and builders/developers. The special court is proposed to function under the supervision of a District Judge.

The CCOB pointed out that 90 violations of Building bylaws were being committed in justthree Towns of Saddar, Lyari and Liaquatabad and all 32 concerned officials were suspended on the order of Sindh Minister for Local Government for ignoring the violations.

He said these officials have now been restored but not given any posting until all the illegal buildings are demolished which they allowed to be constructed under their very nose and alternatively they will have to go home.

He informed that out of 100 buildings identified as having been constructed illegally, 90 were located in the Towns of Saddar, Lyari and Liaquatabad.

He said illegal construction activities started because of lacking police support to the under-strength KBCA.

In this regard he particularly cited example of two coolies who were thrown on ground from 7th floor of a building in Saddar Town being constructed illegally when they went their for demolition action.

He pointed out that in Lyari Town 17 buildings were demolished but these were reconstructed and KBCA took the matter to High Court and also registered a FIR against the police as they were directed by high Court not to allow a demolished structure to reappear.

He said that out of 100 buildings identified 28 were demolished in Lyari and 11 out of 12 in Saddar Town besides 17 in Liqauatabad Town.

He said while situation has been controlled in Liaquatabad Town, vilations are still being reported from Saddar and Lyari Towns and the situation will come under control there and elsewhere in the city when KBCA Police Station and Special Courts will start functioning.

The CCOB informed that KBCA plan for city skyline has been approved with demarcation of two high density zones - at I.I. Chundrigar road to Mai Kolachi and around Shaheed-e-Millat Road encompassing Shahrah-e-Faisal, Kashmir Road and Shahrah-e-Quaideen.

He said buildings to be constructed in these zones will have their own power generation, water supply and sewerage treatment facilities and their construction will not over-burden existing utilities.

Anyone wishing to undertake a project in high density zone will have to work either in joint venture with City or Provincial Government or bring foreign investment. He said they would be allowed 1:12 ratio whereby minimum 40 floors can be constructed with no upper limit.

He said that it has been suggested that instead of each project to have its own power plant, water treatment and sewerage treatment plants, these facilities would be created for entire area for which Federal Government has been approached for assistance in the form of seed money.

He said the idea was developed by a team of 11 renowned architects led by Yawar Abbas Gilani.

Replying a question, Manzoor Qadir said that the KBCA provided funds of Rs 1.18 billion to the City District Government in one year.

Posted by Chief Editor at 2:56 PM No comments: 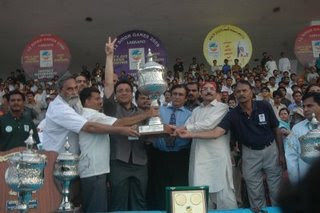 The 12th edition of the Sindh Games concluded with a colourful ceremony at the Shaheed Benazir Bhutto Sports Complex in Larkana on May 31 with the Chief Minister, Syed Qaim Ali Shah declaring the Games closed.

He paid rich tributes to the Provincial Sports Minister, Dr Syed Mohammad Ali Shah, to have dared holding the Games in the month of May, that’s generally considered hot from the sports point of view.

“We have known that the outdoor sports events in our country are staged in the season of winter or spring. But Dr Shah deserves credit to have given us the concept that the Games could also be held successfully in summer. The success of the 12th Sindh Games proved the point that every season is suited to sports if the events are managed professionally,” he observed.

The Chief Minister, while congratulating Karachi Region for clinching the trophy once more, urged the athletes of the other four regions to continue working hard for improving their performance in the future events.

He presented the winners trophy to Dr Frahan Essa Abdullah, chef de mission of the Karachi Region who was then carried on shoulders by the elated members of the victorious contingent.
Syed Qaim Ali Shah announced that the next edition of the Sindh Games will be staged in Karachi. He announced a grant of Rupees five million for the sports department for holding the 12th Sindh Games in a splendid manner.

Speaking on the occasion, Dr Shah observed that his mission was to spread the flame of sports in every nook and corner of the province and he needed the support of the provincial government in fulfilling his ambition.

“I was advised by certain quarters to postpone the 12th Sindh Games or move it to any other venue in view of the weather conditions here. But it was my commitment to the people of Larkana to hold the Games here and we were able to organize it successfully despite all odds being stacked against us,” he said.

Dr Shah believed that the interior regions of the province deserved greater attention as they lacked the infrastructure facilities that didn’t allow their athletes to progress beyond a certain level.

The Provincial Minister for Local Government, Agha Siraj Durrani, who himself holds a black belt in karate, was highly appreciative of the efforts of Dr Shah and his team for having braved the hot weather and organized the Sindh Games so successfully in Larkana.

Ahmed Ali Rajput, Secretary, Sindh Olympic Association (SOA), in his speech, highlighted the various challenges that had to be met in holding the Games.

The welcome address was delivered by Shoaib Ahmed Siddiqui, Secretary Sports and Youth Affairs, Government of Sindh, in which he acknowledged the support of the concerned quarters in accomplishing the task of holding the Sindh Games.

“According to the directives of the government we are working tirelessly to develop sports culture in the province. It’s our desire to engage the youth in healthy activities with sports being on top in the list of our priorities,” Shoaib Siddiqui said.
Posted by Chief Editor at 2:37 PM No comments: