7 killed as Karachi echoes with gunshots 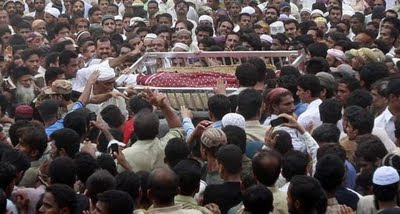 Tension grip the City as the funeral of Rehman Dakait and three of his accomplices including Waja Aqeel, Nazeer Baloch and Aurangzeb Baba was held at Kalakot in Lyari Town on Monday.
Seven people lost their lives in separate incidents of firing, including those who were killed after unknown armed men targeted the funeral participants at different neighbourhoods.
It is important to mention that Abdul Sattar Edhi has also reportedly attended the funeral.
According to details, after offering final prayers at Nawalain, Rehman Dakait’s body was being taken to Mawach Goth cemetery, when miscreants started firing injuring Khair Bux, Naushad and Qadir, who were shifted to the Civil Hospital.
In another incident, two young men Naeem Baloch and Salman Baloch were killed by aerial firing at Old Golimar Manghopir Road within the precincts of Pak Colony Police Station.
The duty officer of the police station say the victims were on their way to attend the funeral of Rehman Dakait when some unidentified men opened fire on them, while some sources in police say that the assailants might belong to the Dakait’s rival group.
Another man lost his live and his friend was injured seriously when armed men resorted to indiscriminate firing at the procession within the jurisdiction of Baghdadi Police Station. Noman (30) and Majeed were rushed to the Civil Hospital where Noman succumbed to his injuries while Majeed’s condition is said to be critical.
One more death has been reported in firing incidents at the participants in different areas. Similarly, an activist of MQM was shot dead within the limits of Baldia Town Police Station along the route of Rehman’s funeral procession.
Police said the MQM activists were sitting near a graveyard when the funeral procession of Rehman Dakait was heading towards Mawach Goth. Some unknown assailants resorted to firing and injured Rafiullah alias Raju, Anwar Hussain and Muhammad Shehzad, who were taken to local hospital in a critical condition where doctors pronounced Raju as dead.
Posted by Chief Editor at 5:11 PM No comments: Links to this post