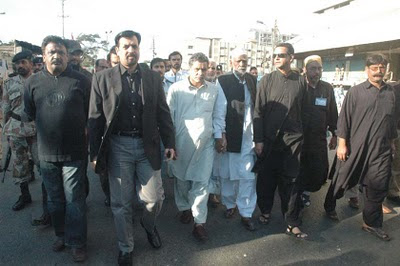 City Nazim Syed Mustafa Kamal has pledged to make Karachi the epitome of peace and harmony saying that the present conspiracy against the peace and prosperity of Karachi will be thwarted with mutual harmony and brotherhood.

Talking to media representatives on Tuesday at M.A Jinnah Road he said that the enemies had conspired to commit bloodshed in the peaceful and beautiful city of Pakistan. They wanted to bring the citizens against each other but we will foil this conspiracy with a show of mutual harmony and brotherhood.

City Nazim condemned the terrorist act in the main Ashura Procession and prayed for those martyred in the incident. He also prayed for quick recovery of the injured. He said that the enemy has attacked the only peaceful city of the country and tried to disrupt the peace process. Besides terrorist act the miscreants also torched hundreds of shops and buildings in the commercial hub of the city which caused a collateral damage to dozens of buildings and huge loss to citizens. He demanded thorough enquiry into the incident that has inflicted great loss to economy as well.

Giving the reasons for delay in the fire extinguishing operation City Nazim said that in all 300 locations from Light House to Bolton Market at M.A Jinnah Road were set on fire in the incident while the fire brigade was prevented to take immediate action as they opened fire on fire brigade vehicles and injured the firemen. Despite of that first of all we initiated rescue operation to save the residents stranded in buildings. He said that the presence of a good number of ware houses, storage of chemicals and plastic material and cloths also intensified the blaze.

Nazim Karachi said that besides using our own resources we also called for help to other organizations and the district nazim Hyderabad Knwar Naved was asked to provide the fire tenders and snorkel ladder on which he sent 5 fire tenders and a snorkel to Karachi to take part in the operation. The tanker service of KWSB was also used to supply water in enough quantity to fire tenders.

This may be noted that the City Nazim Syed Mustafa Kamal personally monitored the fire extinguish and rescue operation in Bolton Market and other locations at M.A Jinnah Road with DCO Karachi Javed Hanif and M.D KWSB. After reviewing the situation from Central Command and Control Center of City Government and issuing directives to officials he instantly reached the affected area at M.A Jinnah Road at 12 O’ Clock in the night and remained their till the next day while personally monitoring the operation.

Posted by Chief Editor at 10:48 PM No comments: Links to this post