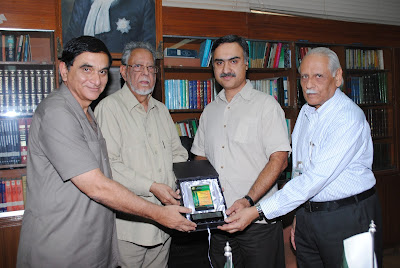 
The Sir Syed University of Engineering and Technology (SSUET), Karachi, has entered into a technological advancement phase with the signing of two agreements, one for the development of state of art website and the other related to the long outstanding requirement for Campus Management System.
"It is just a beginning and process for this technological advancement will continue to bring this university as best among top engineering universities,” the SSUET Chancellor, Jawaid Anwar, declared while speaking at the signing ceremony.

Chancellor Jawaid Anwar said that today a dream has come true to lead the university towards advance technological campus management and also presenting the brand face of the university. 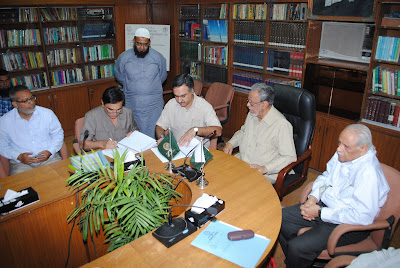 He appreciated Registrar Syed Sarfraz Ali for opening the door for this purpose through these well conceived agreements.

He observed that the selection of the products under these two innovative advancements would be par excellence and prove immensely not only for the university itself but more for its students.

He called upon the two companies to take care of time frame as the process for admissions was due to start by September.

In his brief remarks, Vice Chancellor Prof Dr Jawaid H. Rizvi said that this advancement should have come much earlier.

He remarked that the university has committed itself to take care of its students through such innovative technologies and this process will continue under the Chancellor's guidance.

Registrar Syed Sarfraz Ali in his opening remarks pointed out that achievement of a major milestone was being witnessed for transformation of the SSUET into a modern state of the art university befitting to its name.

He informed that it was after weeks of marathon deliberations that the two agreements were finally prepared. He hoped that the project will be completed and launched at a soft launching ceremony was being planned at the SSUET on August 14.

He thanked the Chancellor and Vice-Chancellor for having bestowed their full confidence, trust and liberty to negotiate these two major contracts that will reshape the image of this university, named after Sir Syed Ahmed Khan, the icon for Muslim education in South Asia.

Later the representatives of the both the companies briefed the ceremony participants about salient features of the two projects.

Amir Gilani said that the project of Campus Management will cover the entire life of a student from admission to graduation besides all campus related working, functions and events, adding that his team will start work on the project from next week and first module will be offered by August and the entire project will be ready by September before the admission process commences.

Replying to a Chancellor's query, he said the project will incorporate all the future requirements and developments.

Chancellor Jawaid Anwar advised the website developers to design the SSUET's which should be outstanding both scientifically and artistically.

Mohammad Fahed assured that the website will fully relate to modern parameters along with Sir Syed's legacy.
Posted by Chief Editor at 11:05 AM Links to this post