KARACHI: The Crime Investigation Department (CID) of the Sindh police has arrested an Al Qaeda operative here who is associated with the Tehreek-e-Taliban Pakistan (TTP), and claimed to have seized suicide jackets, weapons and other equipment used in terror activities.

The arrested Taliban was identified as Mohammad Naeem Rehmani, son of Qadir Bux Rehmani and was arrested on June 5 in Lyari Town following intelligence information received by the CID.

CID Additional Inspector General Javed Bukhari while speaking at a press conference said during initial investigation, the arrested person revealed that he and his associates were planning to carry out major terror activities in Karachi, including suicide attacks, and therefore they had stocked a huge cache of weapons and explosives.

Offices of intelligence agencies, top government officials, CID officials and high-profile personalities were among their targets.

The arrested terrorist confessed that his group sent its associates to Afghanistan for training. “Several of them are receiving training in Afghanistan,” the official added.

Investigators also revealed that the arrested Taliban had links with Al Qaeda and was working as its operative in Karachi.

He is an expert in making suicide jackets, the official said.
Posted by Chief Editor at 12:03 PM No comments: Links to this post

Over a dozen killed in last 24 hours, Political murders continue in city

KARACHI: Killing of political activist goes unabated in the city and over fifteen political activists were gunned down in the last 36 hours in the city. About a dozen were killed in the last 24 hours and city remained under the grip of uncertainty, fear and panic.
Activists belonging to Mohajir Qaumi Movement (H) and Muttahida Qaumi Movement were the main targets while one each of Jamat-e-Islami, Awami National Party and Pakistan Peoples Party were also killed in the recent wave of target killing incidents reported in the city.
According to yesterday’s details, one Saleemuddin 47 was shot dead, while his daughter Sehrish and wife Fareeda were injured, by the firing of unidentified armed men in Jamshed Quarters police limits. Police sources said that the deceased was the resident of H-25, Jehangir Road, Martin Quarters. Jameel 40 was shot dead in Khokharapar police limits. The deceased was resident of Saudia Colony, an activist of MQM-H. 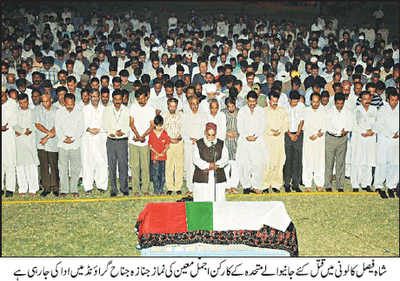