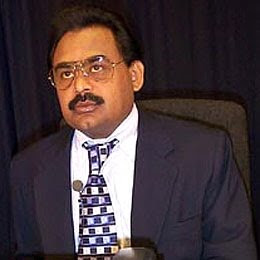 Chief of Muttahida Qaumi Movement (MQM) Altaf Hussain has said that he is ready to debate on any TV channel with all the constitutional experts who demand trial of former President General Pervez Musharraf under Article 6.
In a telephone address to a convention of Local Government representatives at Pakka Qila grounds in Hyderabad city under the auspices of MQM, the party chief said: If the constitutional experts succeed in defeating me, then I will not continue with my present stance. However, if they fail to defeat me, then they should desist from misleading the public about the issue.
He also asked: If Musharraf’s action on 3 November 2007 was wrong, then under which Quranic verse or constitutional clause is the action of 12 October 1999 being held legitimate? “The honorable judges who refused to take oath under the PCO on the 12th October 1999 must not support those who issue wrong statements or make wrong demands”, Altaf advised.
Chief of MQM raising an important issue of trial and punishment pointed out that: The country’s law and justice demands that punishment must be given not only to a single person who commits a crime but that those persons involved as supporters and partners in that crime must also be punished.
Altaf Hussain further said: Today, all the people throughout Pakistan are now demanding that the present Local Government system must not be terminated, but must be continued so that democracy is promoted and the undemocratic sphere of politics owned by a few families be terminated forthwith.
He further reasoned that: If the government or opponents feel there were some wrongs in the system, the same must definitely be removed, and we will not have any objections against it, but the system must not be terminated. (NC Report)
Posted by Chief Editor at 4:55 PM No comments: