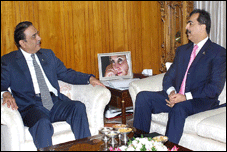 According to sources, the meeting discussed the issues relating to electricity crisis in Karachi which has broken out violence here.

President Asif Ali Zardari and Prime Minister Syed Yousuf Raza Gilani, taking strong notice of power outages in Karachi and elsewhere and the subsequent nationwide violent demonstrations, directed the relevant authorities to issue a show-cause notice to the management of the KESC for the frequent power breakdowns in the Sindh capital.

The decision to serve a show-cause notice on the KESC was taken during their meeting at the Presidency on Tuesday night at a dinner in which they discussed a host of issues, including the power outages in Karachi and in other parts of the country.

Presidential spokesman Farhatullah Babar said that the president advised the government to take appropriate action immediately to streamline the working of the KESC and make it responsive to the challenges. Following the presidential advice relevant authorities were instructed to take immediate action.

Accordingly a show-cause notice was issued to the corporation late at night saying that action might be taken against it under the law. It includes the taking over of the KESC management for its consistent failure in meeting its obligations.

The president also briefed the prime minister on his meeting with PML-N Quaid Mian Nawaz Sharif in which the two parties agreed to reform the Constitution in accordance with the Charter of Democracy and purge it of the 17th Constitutional Amendment.

Meanwhile, sources said the law and order situation in the country due to power outrages also came under discussion.

Sources said the prime minister informed the president about the formation of the ministerial committee to look into the energy crisis as the first meeting of the committee was being summoned today (Wednesday).

Sources said the president and the prime minister also discussed the thorny issue of local government system. The prime minister sent an advice to the president last Saturday to allow the provinces to process draft Provincial Governments Acts, 2009 and to make amendments to their Local Government Ordinances for the dissolution of the institutions and appointment of government officers as administrators.

Sources said the president and the prime minister decided to hold further discussion on the issue to take a final decision.

Sources said Minister for Parliamentary Affairs Dr Babar Awan, who was also present in the meeting, briefed the president and the prime minister about the legal and constitutional aspects of the issue.

Sources hinted that another meeting between the president and the prime minister is expected on Wednesday to decide the fate of the local government system in the country.
Posted by Chief Editor at 3:38 PM No comments: