PMA to be made as leading marine university of the region 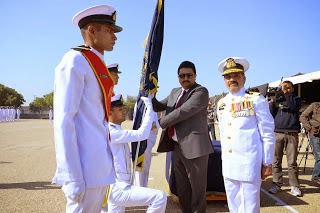 The Federal Minister for Ports and Shipping, Senator Kamran Michael, has said that the government fully recognized the important role of our seafarers towards strengthening of economy and the elevation of the to a degree awarding institution was a testimonial to it.

He was speaking as the chief guest at the passing out parade of the PMA in on January 3. The ceremony was largely attended, among others, by Chairman PNSC, Siddique Memon, Chairman KPT, Rear Admiral (Rtd) Azhar Hayat, and Chairman Port Qasim Authority, Agha Jan Akhtar,

On the occasion, the Minister announced a gold medal from his Ministry to be awarded to cadets and evinced his ministry’s interest to transform  PMA) into a Marine University, to  be the first of its kind in the region and  pledged to take up  this matter at all related levels.

He said that the will provide quality education of merchant navy and other specialized courses to the seafarers of the region.

Senator Kamran Michael stressed the need for strengthening technical institutions adding that greater attention will be paid to marine education and training.

He appreciated the progress made by the PMA in producing quality Merchant Marine Officers to serve the merchant fleet and in providing expertise in other disciplines of maritime sector. He noted that after undergoing two years of academic, professional and physical training the passing out cadets are awarded BSc Degree in Maritime Studies by enabling the PMA to produce quality human resource for the maritime industry.

The Federal Minister felt proud by the accomplishments of the PMA cadets having participated in the International Maritime Conference for the first time held at the where they clinched first and second prizes in poster making and essay writing contests besides winning laurels, medals and trophies in sports and athletics competitions. He hoped that the same spirit will be maintained.

Earlier on, in his welcome address Commandant PMA, Commodore (Rtd) Rana Aslam, informed the Minister about the computerization of exams as well as induction system of cadets.

Later, Senator Kamran Michael awarded Sword of Honour and medals to the top performers of the passing out cadets.
Posted by Chief Editor at 2:45 PM