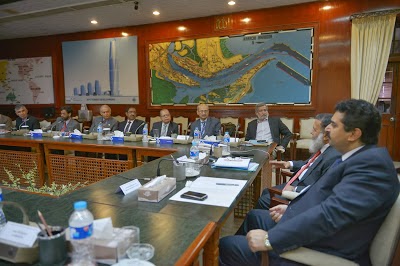 A high level meeting, held in on March 5 with Federal Minister for Ports and Shipping Senator Kamran Michael in the chair, finalized the strategy for transportation of coal from ports to power plants.

The meeting which was attended, among others, by and Shipping, Habibullah Khan Khattak, and Shipping, Chairman PNSC, Chairman PQA and Chairman KPT, briefed the Minister about coal-based power production with focus on improving handling of coal imports their storage and transportation.

The Minister was informed about allocation of three berths exclusively for coal handling at and its transportation to power houses through railway. He was told that terminal facilities have been upgraded making round the clock cargo handling and transportation possible.

It was pointed out that with reference to signing of agreements by Prime Minister Nawaz Sharif for setting up of coal-fired power plants,, preparations have been geared up at ports  speedy port operations. Energy Coordinator to Chief Minister Punjab, Nadeem Aslam Choudhry, specially attended the meeting in this regard.

On the occasion, the Minister was briefed about mega KPT projects including Pakistan Deep Water Container Port, and .

Later Senator Kamran along with Nadeem Aslam Choudhry, was taken on a harbor cruise to witness KPT's coal handling facilities.