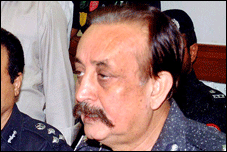 The Capital City Police Officer, Karachi, Waseem Ahmed suspended a DSP and five SHOs for failing to stem target-killing and other crimes in the city.

It merits mention here that earlier, the city police chief addressed the police officers at Arts Council Auditorium and said that the incidents that occurred in the past three days in Karachi, are a mark of shame for the police force.
Posted by Chief Editor at 1:52 PM No comments: Links to this post