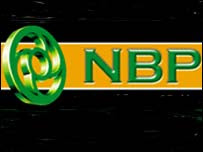 The Chairman, National Industrial Relations Commission (NIRC) vide its Order dated 16th March 2010 has stopped Syed Jehangir, President , NBP Employees Front, Head Office (CBA) from exhibiting banners & posters which are defamatory in nature and also from forcefully entering into the offices of senior Bank officials with a view to pressurize and overawe them. Restraining orders have also been issued directing the union official to refrain from creating law and order situation in the Bank. Both the parties will abide by the Court Orders.
Inspector General Police (Sindh) has also been directed by the learned Court to ensure that no law and order situation takes place in this respect.
Posted by Chief Editor at 12:36 AM Links to this post