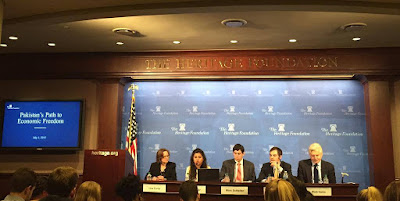 The Heritage Foundation, a US think tank, has developed a detailed document on the economical conditions of Pakistan and what actions the government of Pakistan must immediately take to revive the economy.

The document has been authored by Huma Sattar, a visiting Pakistani scholar, and James Roberts, senior analyst at the Heritage Foundation, with the title of the special report being ‘Pakistan’s economic disarray and how to fix it’ whose launching event was held on July 1 at the Lehrman Auditorium in Washington DC.

Huma Sattar remarked on the ocassion that corruption, poor rule of law, regulatory inefficiencies among the myriad of problems that ail the Pakistani economy today have hindered sustainable growth and will continue to do so until the government implements structural reforms to overhaul the tax system and deregulate sectors such as the power sector.

A large number of experts academia media people and others attended the event and talked about the report.

Marc Schleifer, Director of Eurasia and South Asia, Center for International Private Enterprise Michael Kugelman, Senior Program Associate for South and Southeast Asia, Woodrow Wilson Center Mark Karns Multi-Sector, Advisor to the Office of Afghanistan and Pakistan Affairs of USAID, were other experts to have shared views in the panel discussion. Lisa Curtis conducted the programme.
Posted by Chief Editor at 4:56 PM 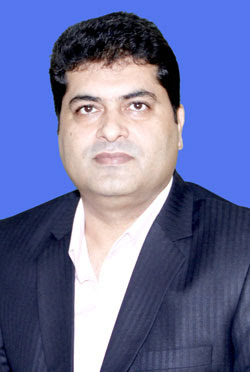 The top functionaries of the Association of Builders and Developers of Pakistan (ABAD) have expressed their grave concern over the Finance Bill 2015-2016 and imposition of 0.6% withholding tax on all banking transactions including withdrawal of Rupees fifty thousand cash in a day from bank accounts.

Junaid Ashraf Taloo, Chairman, Mohammad Hanif Memon, Vice Chairman, and Mohammad Hassan Bakshi, Chairman, Southern Region, in a joint statement, said that the levy of this tax was unjustified and could prove to be a disaster to all businesses including the housing sector.

The ABAD chairman added that it was the policy of the of government to increase the tax net but in reality it depicted the sheer failure of Federal Board of Revenue which had made tall claims of increasing tax payers during the last many years.

It is pertinent to mention that each and every member of ABAD is a taxpayer but even then their names do not appear on the list of active tax payers. Whereas their names do appear in the FBR portal thereby tax amount of 0.6% is being deducted on all transactions.

Hanif Memon, Vice Chairman, ABAD, stated that the imposition of withholding tax on banking services will create parallel system of direct cash dealings which will affect the banking sector as non-banking channels will flourish.

Hassan Bakshi, Chairman, Southern Region, ABAD, remarked that account holders have already started withdrawing cash from their accounts to keep it in their lockers and it seems that we are moving in the old times when gold coins were used to make transactions.

Furthermore the ABAD chairman felt that with great difficulty the business climate was improving, the politicians should not indulge in any adventure which derailed the economy.

“The memories of freezing foreign currency bank accounts is still fresh in minds of the business community,” Junaid Taloo recalled.

He appealed to the Federal Finance Minister, Ishaq Dar, to abolish the imposed tax as it was creating confusion and unrest as businesses are being subjected to double taxation. “This abolishment will also help builders and developers, businessmen and industrialists to engage themselves in business without the fear of double taxation,” the ABAD Chairman concluded.
Posted by Chief Editor at 4:50 PM