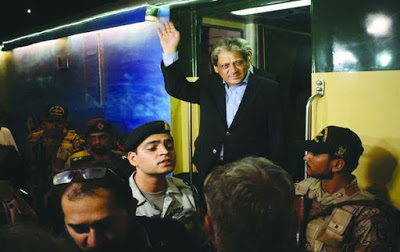 The Azadi Train after travelling through all the four provinces of the country reached Karachi on September 4.

The Sindh Governor, Dr Ishrat-ul-Ebad Khan, and a large number of people warmly welcomed the train which culminated its 4,000-kilometers journey at the Cantonment Station in Karachi.

An impressive fireworks demonstration was organized upon the arrival of the train, which contained the coaches representing the culture and traditions of all the four provinces, Azad Kashmir and Gilgit-Baltistan.The Sindh Governor visited different bogies of the train and took keen interest in the exhibits.

Speaking on the occasion as a chief guest, Dr Ishrat-ul- Ebad observed that the Azadi Train was a wonderful combination of the cultures and traditions of different provinces and national unity and harmony.

He remarked that the Azadi Train had received very warm welcome throughout its journey across the country including Karachi, which reflected people's love and patriotism with Pakistan. 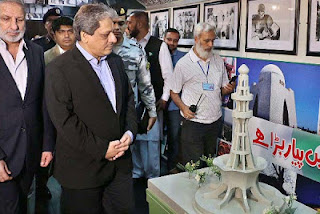 The Governor said that this special train's initiative will be helpful in promoting awareness about the struggle for the creation of Pakistan and provide details about important projects such as China Pakistan Economic Corridor (CPEC) and other schemes of national significance.
Dr Ishrat-ul-Ebad appreciated the efforts of Pakistan Railways and other relevant institutions for the success of Azadi Train initiative.

The train will remain stationed at Karachi for two days for exhibition and various programmes will also be organized during this time.

The Azadi Train had started its journey from the Margalla Railway Station in Islamabad on August 11. Its six coaches represented the culture and traditions of all the four provinces, Azad Kashmir and Gilgit-Baltistan, while six other coaches related to the Pakistan Movement, Kashmir struggle, services and sacrifices of Armed Forces, exhibiting about different important projects and the history of Pakistan Railways.

Posted by Chief Editor at 3:52 PM Links to this post