The first-ever Hackathon at the Aga Khan University (AKU) has brought together a variety of experts to solve pressing problems in the city’s emergency room facilities.

The hospital’s Emergency Room (ER) is often the first point of call for citizens whenever a disaster or public health outbreak hits Karachi.

Hence the challenges arising from the prevailing situation, infrastructure failings and resource shortages are acutely felt in the ER as medical staff rush to treat a surge of patients facing life-threatening conditions.

In order to find innovative solutions to these daily challenges, the AKU will be hosting a three-day medical hackathon.

The event, from August 13 to 15, will see professionals from all walks of life, nurses, doctors, businessmen, engineers and designers, pool together their knowledge and ideas to find unique solutions to issues facing emergency departments in Pakistan.

More than 100 participants and 25 mentors, divided into multiple teams, will ‘hack’ or find quick solutions to medical challenges.

One of the speakers will be Dr Junaid Razzak, who was the head of Aga Khan University Hospital’s Emergency Room and led the development of Aman Foundation’s emergency medical services.

Regarding the need for a medical hackathon, Dr Junaid Razzak said: "Traditionally, healthcare systems are hierarchical, risk averse and slow to change. While there are many benefits to this traditional approach, the lack of innovation especially in environments with few resources, have not delivered positive healthcare outcomes for the majority of people.”

“I believe that solving the challenges of healthcare for countries like Pakistan is possible through innovation. I am excited that a group at AKU has taken the key first steps to organize and recognize non-traditional thinking to solve key health challenges. This has the potential to fundamentally change the discussion around approaches to healthcare systems," he added.

Throughout the event, mentors and veterans from various professional fields from business to IT to medicine will share their experience of solving problems with participants.

After two days of fast-paced work, the hackathon will conclude with presentations to a panel of judges, presenting concrete, sustainable solutions suited to low to middle income countries such as Pakistan. The panel will assess ideas worth being funded and launched.

Speaking about the event, Dr Asad Mian, associate professor at the Department of Emergency Medicine at AKU said: “Hackathons are full of energy, drive and enthusiasm. I was inspired by Hacking Medicine’s event at the MIT (Massachusetts Institute of Technology) and the drive and enthusiasm of participants to address and solve healthcare problems of global significance."

“The MIT’s Grand Hack 2016 was delightfully different. Therefore, with the MIT’s constant support and feedback, our team is now hosting the first-ever medical hackathon at AKU. We hope to improve lives through ‘hacking’ medicine in a manner that is critical, creative, innovative, and above all, resourceful,” he concluded.
Posted by Chief Editor at 4:09 PM 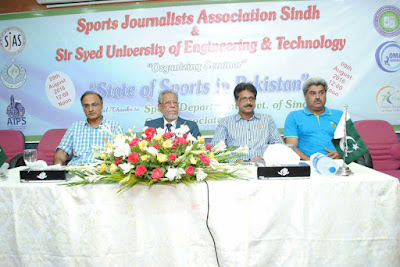 The Pakistan Hockey Federation (PHF), as a part of its policy to facilitate the youngsters, has decided to lay astro-turf at here the Sir Syed University of Engineering and Technology (SSUET).

This was announced by Olympian Naved Alam, Director, Development & Domestic, PHF, during the seminar entitled ‘State of Sports in Pakistan’ organized by the Sports Journalists Association Sindh (SJAS) with the collaboration of the SSUET, held at the university campus on August 9.

“Indeed it’s a tragedy that Pakistan’s hockey team is not playing in the ongoing Olympic Games in Rio de Janeiro. Without blaming those responsible for the catastrophe we have decided to get on with it. We have the capacity to regain the lost glories in hockey. India had also not qualified for the 2008 Olympic Games but their team is playing now. There seems no reason why, with so much talents, we could not bounce back at the international level,” the PHF official remarked. 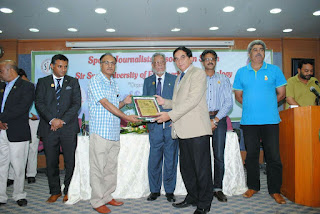 The SSUET Chancellor, Jawaid Anwar, who presided over the seminar, urged all the stakeholders to work jointly for the cause of promoting sports having brought laurels for the country in the past.

“It’s time to join hands and rise to the occasion. The country is fortunate to be blessed with enormous talent in sports. It’s the responsibility of all those institutions and departments to work in cohesion to build a kind of infrastructure which is sports friendly,” he reckoned.

“As part of our contribution to this cause, we are pleased to revive scholarships for our students who excel in sports and are able to earn colours at provincial or national level. We are also in the process of reinforcing our sports department and we would soon be engaging professional coaches to train our students in various games,” the SSUET Chancellor declared. 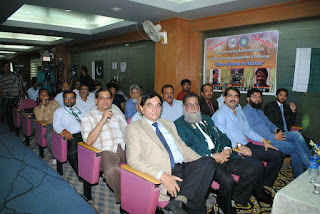 Earlier in his opening remarks, the SSUET Registrar, Cdre (retd) Syed Sarfraz Ali, had briefly touched upon the accomplishments of the university in the field of sports.

Dr Junaid Ali Shah, President, Asghar Ali Shah Sports Foundationa and a former Sindh Minister, believed that the turnaround in sports was very much a possibility if efforts were made collectively in this direction.

“Let’s try to make things happen. The situation is not conducive but we can still achieve our goals with strong leadership. We have to trust our hopes not fears. Optimism holds the key here. We need to work overtime with missionary zeal in order to accomplish our cherished goals,” he stressed. 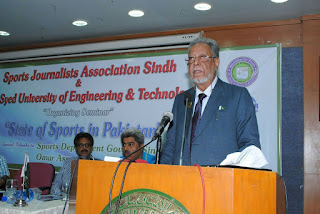 “These departments have a history of supporting sports. It will make sense if one of them is entrusted with the responsibility of taking care of cricket while the other one can look after hockey or squash,” he added.

Azeem Hafeez, a former Test fast bowler, pointed out that the lack of playing facilities was one of the major reasons in the declining standards of various sports in Pakistan.

“In our playing days there were schools who housed playgrounds. We also had the access to the various cricket grounds which were open to the boys of all over the city. Unfortunately now the grounds have boundary walls and they charge hefty fees to let the cricketers play. Similarly schools cricket is also in doldrums,” he regretted. 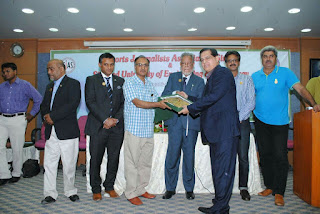 Rishad Mahmood, Editor Sports, Dawn, didn’t mince words in holding the sporting legends responsible for not giving back to sports.

“It’s very painful to note that those sportsmen who’re able to make it a big, with the exception of just a few, have no inclination to give it back to the game which earned them name and fame. Similarly the sports organizers appear more eager for joyrides than finding ways and means to promote sports,” he lamented.

Mansoor Ali Baig, Editor Sports, Duniya, in his comprehensive speech, covered the ups and downs of the Pakistan sports over the years, recalling the golden era of 1990s when the country had four world titles at a time.

The seminar was attended by a large number of the SSUET faculty and students besides the members of the SJAS and officials of the various sports bodies.
Posted by Chief Editor at 4:06 PM