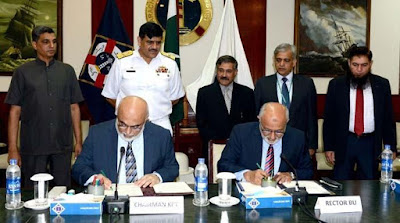 The Karachi Port Trust (KPT) has signed an agreement with the National Centre of Maritime Policy Research (NCMPR), Bahria University Campus, Karachi at a ceremony held at KPT Head Office.

Speaking on the occasion, the KPT Chairman, while unveiling the objectives, highlighted the existing gap resulting in creation of increased demand for skilled human resources in Pakistani Ports and Shipping sector.

The establishment of chair, he observed, will fill the gap in due course as professionals and skilled human resources will be available for undertaking maritime projects within the country and pave the way for maritime education as well thus opening avenues for research and innovation to meet the emerging demands of port operations while using maritime expertise and international standards.

He stressed on linking KPT Staff College with the Chair to establish further linkages with the international/national institutes of maritime industry.

He said that the materialization of the project will result in benefiting the KPT through focused research for future expansions and efficient port operations as the maritime sector is gradually growing in Pakistan.

On the occasion momentos were also exchanged. The ceremony was well attended by top management officials of KPT and the NCMPR besides Director General NCMPR Vice Admiral (Rtd) K G Hussain.
Posted by Chief Editor at 5:26 PM Links to this post