CITY NAZIM HANDS OVER KEYS OF SHOPS TO OWNERS IN 9 RESTORED BUILDINGS OF M.A JINNAH ROAD 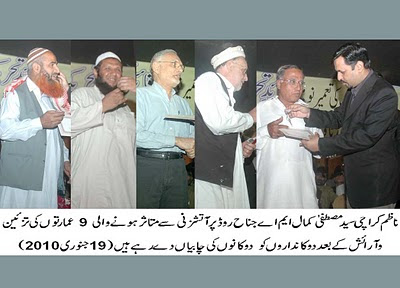 City Nazim Syed Mustafa Kamal handed over keys of restored and renovated shops to owners in 9 of the arson hit buildings including old cloth market at Light House on Tuesday. He also laid the foundation stone for the reconstruction of damaged Quetta Market and said that restoration work at remaining 20 markets would also begin as soon as the buildings are handed over to city government after the assessment of amount of damage. City Nazim said that we already have 20 organizations that would perform the reconstruction of damaged buildings.

He said this while addressing a huge gathering at the handing over of shops in 9 restored markets to their owners. DCO Karachi Javed Hanif Khan, Saddar Town Nazim Muhammed Dilawar, M.D KESC Tabish Gohar and large number of affected traders and people were also present on this occasion. 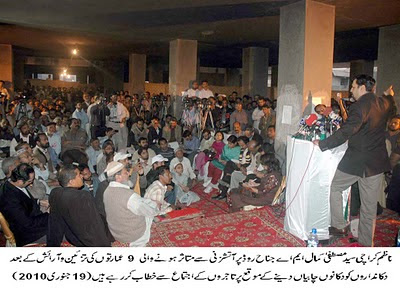 City Nazim said that from the first day he was sure that we would soon succeed in restoration and rehabilitation of affected commercial center at M.A Jinnah Road. Within 20 days we could be able to do all this under the guidance of Quaid-e-Tehreek Altaf Hussain Bhai who had felt the pain of affected business community. “So far all the rehabilitation work has been done by the people of Karachi on self help basis as not a penny has been received in this head from the provincial or federal government” City Nazim said adding that the government formalities took their time and he expect early payment of announced relief to affected shopkeepers.

He said though bomb blasts occurred all over the country but the people in Karachi by taking part in the whole process of rehabilitation of affectees set up a unique example for such events in Pakistan. He said that this incident has thought us a lot. We have seen people here crying vehemently after they lost their all earnings over night. The critics had tried to put all the responsibility of incident on us by leveling all kinds of charges but we left this matter on Almighty Allah who knows better.

City Nazim said that it was only due to the availability of effective surveillance system the law enforcement agencies today catching the criminals on the basis of their pictures in video footage. We had provided 72 hour long video footage before and after the incident recorded by the City Government’s Command and Control Room to police and all intelligence agencies. City Nazim said that the people of Karachi knew well about their well wishers and enemies as they successfully thwarted the evil designs of anti state forces with their mutual harmony and unity. He also prayed for those martyred in the bomb blast on Ashura saying that the people of Karachi were brave enough to face and help each other in such incidents.

City Nazim said that we have completed the repair and renovation work at 9 out of 20 affected markets. The shop owners of old cloth market at Light House who had themselves performed restoration of their shops have been given Rs.7 Lac as compensation. M.D KESC Tabish Gohar on this occasion announced to wave off 4 months electricity bill of the affected traders and distribution of 10 thousand energy savers in the affectees.
Posted by Chief Editor at 11:10 PM No comments: Links to this post