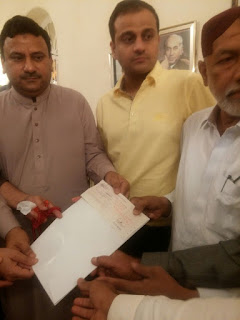 The Nawabshah Press Club has finally received a grant of Rs 10 million sanctioned as part payment for the reconstruction of the club’s building.

In this regard the grant chequue was handed over to the President of the Club, Anwar Shaikh, at a ceremony held at the Sindh Chief Minister House, Karachi.

The cheque was presented by Advisor to Chief Minister for Law, Murtaza Wahab, and MPA Zia-ul-Hasan Lanjar. The Deputy Commissioner Nawabshah, Ghanwar Ali Leghari, and President, Pakistan Peoples Party, Shaheed Benazirabad, Akber Ali Jamali, besides office-bearers and members of the press club’s working committee were also present on the occasion.

Speaking on the occasion, Zia-ul-Hasan Lanjar appreciated the role of the Nawabshah Press Club towards promoting the democratic causes and hoped that its journey towards strengthening democratic rules will continue with greater zeal and vigour.

He commended the office-bearers of the club for having undertaken the task of building a new premises for the institution. 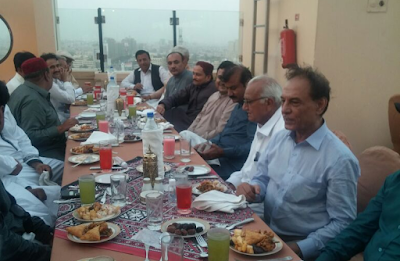 The President of the club, Anwar Shaikh, thanked the Sindh Government for its support and said that the new building of the Nawabshah Press Club will emerge as a model club of Sindh.

He was of the opinion that the new building of the club will help in facilitating the members in discharging their professional duties.

Later the visiting office-bearers of the Nawabshah Press Club were hosted an Iftar-Dinner at Hotel Avari Towers.
Posted by Chief Editor at 3:49 PM