The Sir Syed University of Engineering & Technology (SSUET) has achieved commendable success in developing information and communication technology and emerged as a modern educational technology hub contributing significantly to both knowledge acquisition and knowledge creation.

This was stated Engr by Z.A. Nizami, Chancellor, SSUET, at a reception hosted to welcome O.M. Qarni, a senior Aligarian from the United States and now on a visit to Karachi. 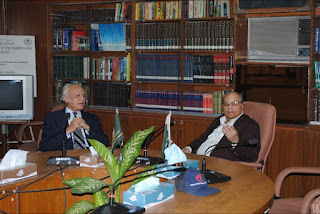 Engr Nizami pointed out that new initiatives have further ignited and accelerated the creative and research potential of SSUET’s faculty and students. The robust measures undertaken have infused a new sense of confidence and energy in the academic and administrative work culture of the university.

On the occasion, Mr Qarni, who served a long spell of civil service in in various administrative positions, recalled his memories of stay at and said he spent a very eventful and productive life while in .

Despite difficulties of various magnitudes, the major initiatives took place to reposition AMU on a resurgent growth and expansion track, he remarked.

AMU, he said, witnessed an era of transition of great significance and during the last four and half years, a new wave of expansion and capacity building has brought into its academic and administrative fold, a heightened sense of confidence and achievement.

He described the establishment of the SSUET in a historical and epoch-making initiative which proved to be a milestone in the educational development of the nation.

He narrated a number of interesting episodes of student life at when new entrants, merely out of fun, used to be taken by seniors to the “childhood grave” of great reformer and educationist Sir Syed Ahmed Khan.

On the occasion fateha was offered for late Pir Saheb Pagara, who was also an Aligarian and had stayed in from 1943 to 1946 before he was taken to . He recalled his first meeting with Late Pir Pagara at Khairpur where he was posted as Deputy Commissioner. 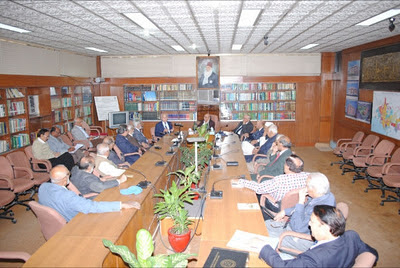 Chancellor Engr Nizami informed that during his life time, Sir Syed Ahmed Khan had refused to name after him but said that anyone, establishing a university after his death, can name the same after him. He said it was after 96 years of Sir Syed’s death that this University came into being after his name.
He said that 100 years have passed to the establishment of but even the present younger generation continues to harbor the same spirit.

He said that Aligarians living in the have made generous contributions and donated Rs 80 million worth equipment to this university which is being run on no profit no loss basis in keeping with the traditions set by Sir Syed Ahmed Khan.

On the occasion fateha was also offered for Arfaa Karim, world’s youngest Microsoft Certified Professional who made nation grieved with her death recently. Engr Nizami informed the visiting Aligarian that Arfaa used to visit this University and she was very impressed with Aligarians.