The elected representatives of the business community at the Karachi Chamber of Commerce and Industry (KCCI) have expressed the hope that dwindled economy and battered industrial sector will witness a new surge during the next five years.

They made the assessment on the basis of formation of new government to be formed by Mian Mohammad Nawaz Sharif which, they noted, has dedicated industrialists, businessmen and experts in the related fields in its fold who are capable to deliver which the previous government could not.

Their remarks in this regard came in a meeting with Engr Mohammad Adil Usman, Chancellor of Sir Syed University of Engineering and Technology (SSUET), Karachi, held at the university campus on May 15 The 21-member delegation of KCCI, led by its President, Mohammed Haroon Aagar, visited the university and discussed various matters to further strengthen the existing coordination and relationship with SSUET.

The KCCI chief pointed out that no expansion occurred in the industrial sector during the last 5 years and this sector has much hopes on the new government which is going to be formed with an industry-related background. He offered large scale internship opportunities for the SSUET students, foreseeing the rapid industrial growth that is likely to take place in the coming years.

He specially referred to the ongoing energy crisis and said that with other sources of energy generation potential also existed to tap solar energy prospects for use in the industries. He also offered to extend sponsorships for the SSUET students, wherever required.

In his remarks on the occasion the SSUET Chancellor, Engr Adil Usman, thanked the delegation for coming over and described it highly encouraging with fruitful discussion. He said while foreseeing the future development prospects, there is imperative need to encourage the students studying engineering in this university which is being run with its self-generated resources to provide best possible knowledge to future builders of the nation.

The Chancellor said that the university does not receive any government grant, still no student is allowed to give his studies just for financial implications and all requirements of poor students are fulfilled by this university which has been awarded the highest “W4” category by Higher Education Commission. 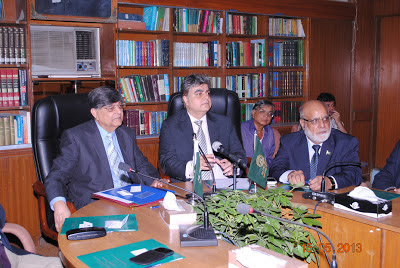 He suggested the KCCI to establish a fund for poor students of this university which will be utilized under the criteria to be worked out by KCCI itself. He also referred to the SSUET’s Research and Development programs and pointed out that world over such programs are supported by the industry. He said that R&D programs at universities ultimately prove beneficial for the industry.

He informed the KCCI officials that the university can send talented students abroad if a fund is created by KCCI for this purpose. Engr Adil Usman also referred to the bio-plant designed with SSUET’s cooperation and emphasized that it needs further development to launch it for meeting energy needs.

He appreciated KCCI’s offer for 6-month IT training for the university students and said the University at its end can offer solutions for IT related problems if these come from the Chamber.

On the occasion, Shamim Firpo, Senior Vice-President KCCI, appreciated SSUET’s participation in the Chamber’s ‘My Karachi; exhibition held at Expo Center last year and said that the projects displayed on that occasion drew big public liking.

He said this year the KCCI is organizing the exhibition in July and will earmark an exclusive education pavilion to showcasing the projects of engineering students. He said such programs will help enhance greater SSUET-industry collaboration.

He also referred to the menace of energy crisis and observed that if the new government surmounts this menace, the industry will grow and in turn new job opportunities will create and simultaneously ongoing law and order come under control.

He assured KCCI's total support and cooperation for the SSUET along with other members of the visiting delegation who appreciated the presentation given on the occasion by Registrar SSUET Shah Mahmood Hussain Syed and particularly referred to the quantum of scholarships awarded and the financial assistance give to needy students.